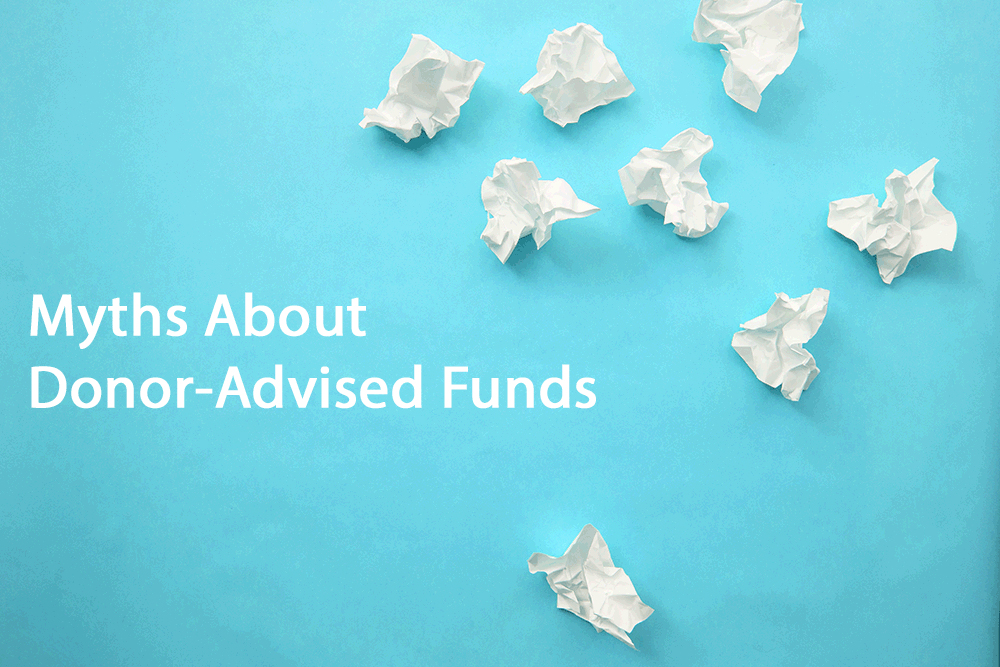 Myths Part 3: Misconceptions about the social value of DAFs

A small but vocal group of professors and journalists has raised the concern that, because donor-advised funds do not require a minimum payout and avail donors of certain tax benefits, all potentially before any dollars get to “traditional” charities, donor-advised funds are actually undermining the causes they are meant to help.

This argument fails to consider the long view. It is impossible for either side of this argument to know if the hundreds of millions in charitable dollars entrusted to donor-advised funds each year would have otherwise been given directly to charities. What is known, though, is that every one of those dollars going into a donor-advised account must ultimately be used for charitable purposes.

According to research by the National Philanthropic Trust, donor-advised funds each year grant roughly 21% of assets to charitable causes – what is known as the “payout rate.” Each fund provider will be different – payout rates tend to be much higher among cause-related funds than with the national providers, for example. The law requires foundations to pay out 5% of their corpus each year, part of which can be made up through operating and overhead expenses. Though many foundations exceed this minimum, their 11.7% average payout rate (as of 2013) still comes in significantly lower than donor-advised giving. Donor-advised funds, then, are generally more actively engaged in giving than your traditional foundation.

Many see their donor-advised fund more like a charitable savings account. Just as a health savings account or an education savings account can be allowed to grow over time but ultimately can only be spent on health- or education-related expenses, donors use their donor-advised fund to grow their charitable capacity. They may do this for any number or reasons: they could be anticipating a capital campaign at a beloved charity, or need more time to gain direction for their giving, or perhaps had a unique wealth event and want to make sure they can be charitable well into the future when resources may be slimmer.

That last example points to a less obvious way in which donor-advised funds play a critical and needed role in supporting charitable giving. Recent research by Howard Husock, a scholar at New York’s Manhattan Institute, looked at the smoothing effect donor-advised fund giving can have on philanthropy during economic downturns. As he says in his report,

Because of their appreciated reserves, DAFs may respond countercyclically to economic downturns, too, providing a floor for overall charitable giving. In the wake of the 2008 economic crisis, this was largely the case: donations from accounts at two of the three NDAFs [national donor-advised funds] increased even as overall U.S. charitable giving declined, from $311 billion in 2007 to $299.61 billion in 2008.

Arguable, the true reason donor-advised fund accounts are under scrutiny lies with how “traditional” charities view the accounts. Donors who at one time may have set up a charitable endowment directly with a charity can now use a donor-advised account to make regular contributions and grants. If the charity strays from its mission or if the donor sees a different group as being more effective, a DAF account advisor can more readily slow, stop, or redirect funding with a simple change in how grants are recommended.

If that donor had created a charitable endowment directly with a charity that strays from its mission and breaches the terms of the endowment, the donor is left with no recourse other than a lawsuit. Witness, most recently, the case of Sweet Briar College or the Robertson Foundation grant to Princeton. There are a myriad of similar stories.

One benefit that many donor-advised accountholders like is the ability to give privately through their fund. Critics complain that this private giving is “shadowy,” and want more transparency into what they pejoratively dub as “dark money.”

There are a number of issues with this concern, not least of which is a misunderstanding of what “transparency” really is. When we speak of a need for transparency, we should be talking about government. After all, government operations are funded by required “contributions” – in the form of taxes. As citizens, then, we have a right to see how our money is spent.

For contributions made by individuals, the focus needs to be on privacy. Just as people have privacy in the voting booth and what goes on inside their homes, they have a right to be private in how they spend their money.

Still, the law requires certain levels of disclosure from charities about their funding. In truth, giving to a donor-advised fund offers no additional privacy than if a donor gave directly to a public charity. In keeping with the American tradition of private philanthropy, a publicly supported 501(c)(3) charity is not required to publically share its donor list, though there are requirements to submit contributor information to the IRS in a non-disclosed portion of the annual tax filing.

As 501(c)(3) public charities, organizations sponsoring DAFs are subject to these same requirements. In reality, the true privacy benefit of a DAF account is that a donor with a donor-advised account can maintain privacy from charities receiving DAF grants. Many DAF account donors want to avoid the inundation of direct mail and phone solicitations that often occur after making just one gift to a charity they care about. Others simply don’t care for the spotlight or attention that might come from their gift.

All clients at DonorsTrust and at most, if not all, other donor-advised fund sponsoring organizations have the option to choose their level of information shared with the recipient of their recommended grants – be that anonymous, just the fund name, or even the full name and address of the account advisor.

Far from having shadowy intent, the ability to give privately is just one of the many benefits that donor-advised fund account donors and advisors take advantage of to suit their personal needs, and to help them become more thoughtful in their philanthropy.

Follow-up:
Get more information on how a DonorsTrust donor-advised account can benefit your charitable giving