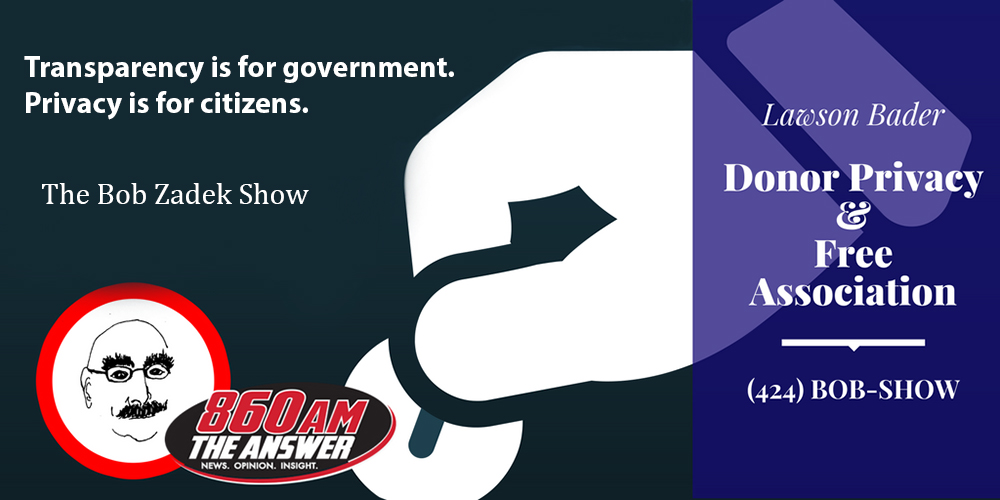 Lawson on the Bob Zadek Show: Transparency and Taxes

By Lydia PiteaNovember 14, 2017No Comments

Our CEO, Lawson Bader had the opportunity to return to the Bob Zadek Show, a libertarian radio segment based in Northern California. Lawson discussed DonorsTrust and some of the top policy issues currently facing philanthropists and non-profits, including donor privacy and tax reform.

The concept of private giving has been integral to the Unites States since the Founding. Recently, however, politicians and special interests have demanded that federal and state governments require the disclosure of donors to organizations that engage in the marketplace of ideas. Too often, this demand is conveniently targeted at organizations which hold views or perspectives that differ from the ones held by those in power. So why has privacy suddenly become a big deal in the area of charitable giving?

Privacy is an added feature of every donor-advised fund – whether it is operated by the commercial banks, community foundations, or “missional” organizations (i.e. DonorsTrust, Tides Foundation, or National Christian Foundation). For DonorsTrust, this extra layer of privacy is doubly important because of our commitment to free association and individual liberty. As Lawson states during the program:

The whole point is, it’s up to the individual.… It’s about choice, and that is a very, very important distinction between us and the groups that are trying to force people to disclose who they are, because they are really giving them no choice.

The interview also focused on general tax policy: the impending changes to the tax code, Lawson’s trip to the White House to discuss philanthropy with the Vice President (which you can read about here), and the significance of the charitable giving tax deduction.

The tax code itself is even written in a way to make it clear, it is encouraging you to participate in that civil society with your dollars, your effort, your time, and your things because the government doesn’t have the scope and the scale to do that. That is why the charitable tax deduction matters.

You can stream the audio here. The interview is also available in the Bob Zadek Show Podcast feed on your favorite podcast app.