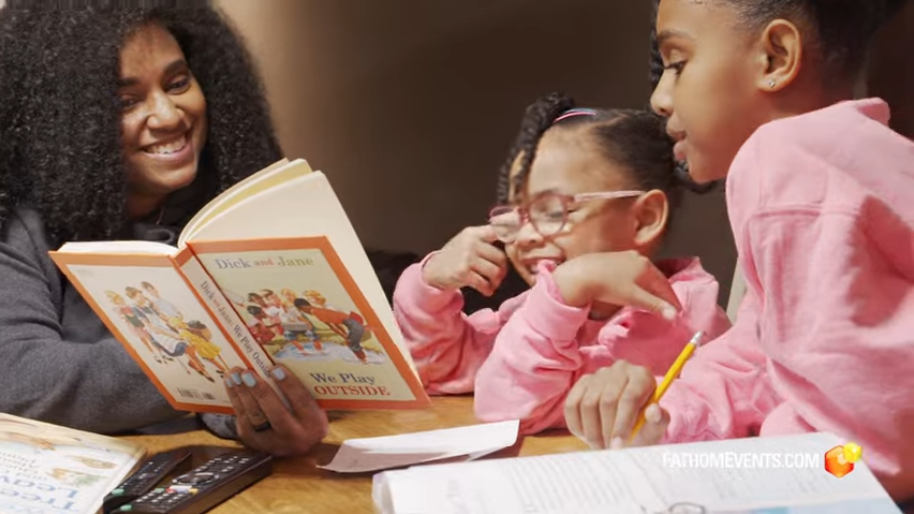 “Whoever is shaping the hearts and minds and souls of our children will determine whether or not we live in a free country and [whether] we have freedom of speech and economic freedom and educational and political freedom and religious freedom,” says Cameron in the film.

The film documents the stories of 17 families that—like Cameron and his wife Chelsea—rejected public school for a variety of reasons and instead embraced homeschooling to meet educational needs and avoid the far-left political dogma that permeates public education.

As families quarantined together during the height of the COVID-19 pandemic and parents witnessed first-hand via Zoom the quality—or lack thereof—of their children’s public-school education, they decided to forgo public school altogether and homeschool their children.

As Chris Talgo, senior editor of the Heartland Institute, writes in the Center Square, “One of the silver linings of the COVID-19 pandemic is the fact that more American families are saying good riddance to public schools and hello to homeschooling.”

Moreover, African-American households are embracing homeschooling at greater rates than other households. As the Census report reads, “In households where respondents identified as Black or African American (Table 1), the proportion homeschooling increases by five times…”

Other minority households are likewise homeschooling in greater numbers, including Hispanic and Asian households. The percentage growth among African-American households, however, is the greatest, as it spiked from 3.3% in the spring of 2020 to 16.1% in the fall of 2020.

These numbers jibe with a 2021 poll from the American Federation for Children, a non-profit school-choice advocacy group our donors support, documenting the popularity of school choice among minority households throughout the height of the COVID-19 pandemic.

Parents and guardians in numerous states are choosing more flexibility over failing public schools—and state lawmakers are getting on board with the idea. In fact, students in West Virginia can apply for a “Hope Scholarship,” money that can be used for private school or home school.

West Virginia state Sen. Patricia Rucker, lead author of the legislation that created the program, says more than 3,000 students have applied for the scholarship, which grants parents up to $4,300 to spend per pupil on qualified expenses in a single academic year, reports the West Virginia Daily Press.

As Andrew Bambrick, education outreach coordinator for the Cardinal Institute for West Virginia Policy, writes, “These expenses are broad categories ranging from tuition and fees to basic supplies, such as pencils and paper.” Click here for the full list of qualified expenses.

The Cardinal Institute for West Virginia Policy has long pioneered and advocated for school-choice policy, including the education-savings-account-program parents and students are beginning to benefit from today.

In fact, America’s Future recently honored Cardinal’s executive director, Garrett Ballengee, with a Buckley award for—among other things—“seeing that West Virginia passed its first school choice legislation in the state’s history…” according to a press release on the award winners.

Ballengee also appeared on that same episode of the DonorsTrust Giving Ventures podcast as Tommy Schultz and explained what his organization is doing to ensure that the scholarships are accessible to families and students throughout the state and, critically, what Cardinal is doing to make sure parents are aware of the option.

Lawmakers and public-policy advocates in the Mountain State, however, aren’t the only ones working to empower parents and guardians, and ensure students receive the best education possible with taxpayer’s hard-earned dollars.

Nick Neily, president of Parents Defending Education, and her team are working alongside parents, giving them the resources and confidence needed to advocate for their grade-school children and hold accountable members of their respective school boards.

As Neily says on the podcast, “For me, the first step is just letting parents know what their rights are,” she says. “Let’s tell people what they need to know, how to get smart quickly and then, from there, let’s teach them how to engage.”

Engaging Students and Making a Difference

A powerful example of a parent making a positive difference in her son’s life is that of Virginia Walden Ford, who worked hard to expand educational opportunities for her son, as his Washington, D.C.-area public school wasn’t producing the results a parent expects to see.

Her story is captured in the film “Miss Virginia,” the screenplay for which was written by master storyteller Erin O’Connor, owner and founder of the Story Incubator. As O’Connor tells our vice president on a recent podcast episode, the film features a heroine everyone can get behind.

“[T]his is the story of a mother that will stop at nothing to make sure that her kid gets a good education, which he needs so that he can have a shot at the future,” says Erin. “Everybody can agree that that is what kids should have and that’s what mothers ought to be able to offer…”

Do you want to discover more charities like the ones above working to improve freedom in education for everyone? If so, visit our podcast page and listen to past episodes with non-profit leaders implementing innovative ideas to ensure strengthen freedom and civil society