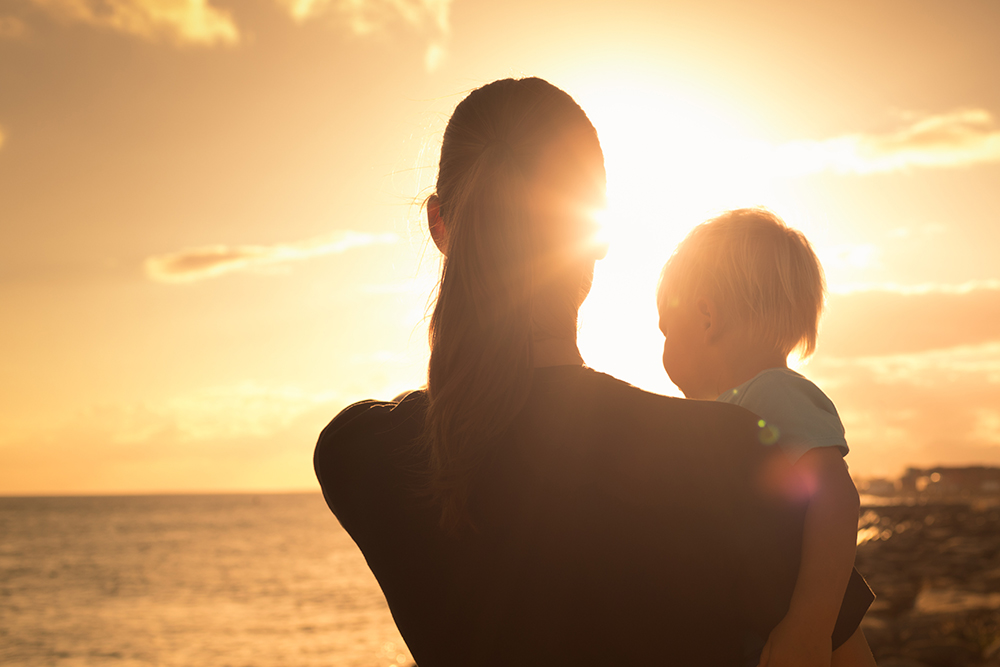 Never Too Soon: The Shock that Taught Me about Planned Giving 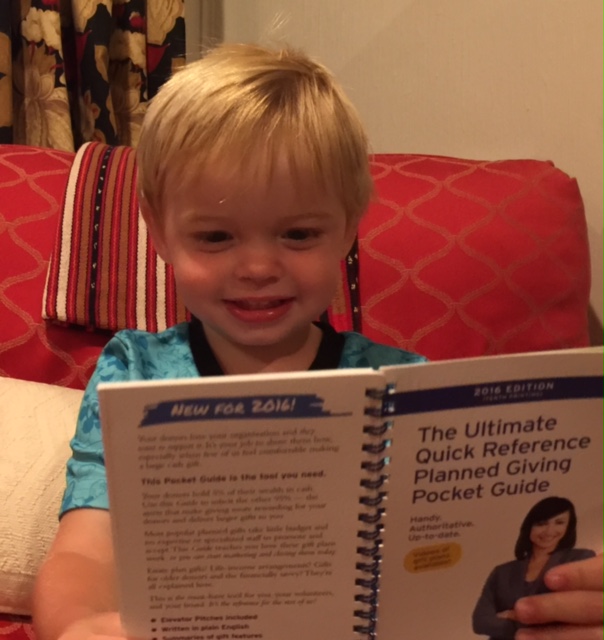 In late 2016, my two year old son P.D. picked up a guide to planned giving that my husband and I had received.

I’d held onto the mailer, because I was in the process of designing a planned giving program for my organization.

I recognized a perfect image: my cute son holding upside down a brochure titled “It’s Never Too Early to Think about Planned Giving.” Take a look!

At the time, even though I’d snapped that photo, my husband and I hadn’t thought about our family’s own planned giving. We were only in our 40s after all! Well, our perspective quickly changed a few months later, when I was diagnosed with a very aggressive Stage 2 cancer.

Within an hour of diagnosis, I began chemotherapy. My cancer was so fast-growing, my doctors did not want to delay treatment. The good news, they said, was that this specific cancer was relatively easy to treat, and I could expect to be cancer free within a month or two.

That wasn’t the case. When my first protocol failed, my oncologist asked me how fast I could get to Chicago to see a top specialist in choriocarcinoma. In 35 years of practicing oncology, I was his first patient of this type who had failed to respond to the normal chemotherapy protocol.

In Chicago, my doctors changed my treatment while also suggesting my chances of survival had decreased. Of course, I was in shock. The thought of leaving my two-year-old without a mother was unimaginable.

Jumping forward to the present, I’m thrilled that the new chemo worked and I remain cancer free. (And even my once straight hair has grown back with crazy curls – life is full of surprises!)

It’s Not Too Early for Planned Giving

I share these details to tell you it is never too early or too late to think about your legacy. During those scary months, I learned that time is precious and we don’t know what the future holds. At age 44, I had to seriously consider our planned giving, and what I might be leaving behind. If I were to die, and something were to happen to my husband, who would raise our kids? What would happen to our assets? These were hard discussions — ones that I did not wish to face, but I’m so glad I did.

We discussed our financial situation, the loved ones in our lives, and about what kind of lasting legacy we could contribute to beyond our deaths. One of the priorities in our life has been working to spread the ideas of freedom in the U.S. and beyond, so we made plans for contributions to be made to our favorite charities in the field.

With four kids, including one in college and P.D. scheduled to join the Class of 2035, our family’s annual charitable giving isn’t very robust, but we realized we can make long-term plans to help the organizations we hold dear. That happens when you opt to leave a percentage of the estate you will build over a lifetime – a long one, fingers crossed! – to the organizations best positioned to contribute to the world according to your values.

Making those plans in 2017 was an important first step for us. We’ve subsequently taken an additional one. If I am blessed enough to see P.D. graduate high school and college and get married and go through all the changes that will come with growing up, who’s to say that the organizations I love today will remain the same tomorrow?

Put Assurances Around Your Legacy

Even the best charities are vulnerable to mission creep and inconsistent effectiveness that might come from changes in leadership. Is there a way to create a safeguard that my assets won’t be used in ways that violate my principles and my sincere hope for impact?

When I joined DonorsTrust, I discovered all the reasons that it’s wise to organize my planned giving through an organization that is specifically focused on preserving donor intent for a community that cherishes freedom. What a perfect match with my priorities!

In addition, DonorsTrust can provide hands-on assistance in organizing your estate in tax-advantaged ways that meet your specific financial needs. Some of the details of charitable remainder trusts and the like can make heads spin, so I’m thankful that DonorsTrust’s experts are on hand to provide reliable, straight-forward advice about how to implement plans that work for each individual.

When I look back at my cancer bout, I realize that it brought more than just the oh-too-memorable struggles.

I’m truly thankful that this painful experience, confronting my own mortality, made me think seriously about my own planned giving. In addition, it gave me the impetus to do more than snap cute pics of P.D., but to discuss with committed donors in the liberty movement about how to think about their legacy and the role of planned giving.

If this is a topic that you’ve been contemplating – or even if this post is making you think about planned giving for the first time – I’d love to chat!  Most of all, I’d be interested in learning about the priorities in your life and how they intersect with the ways in which DonorsTrust can be your ally in developing a planned giving strategy that ensures your values will endure. 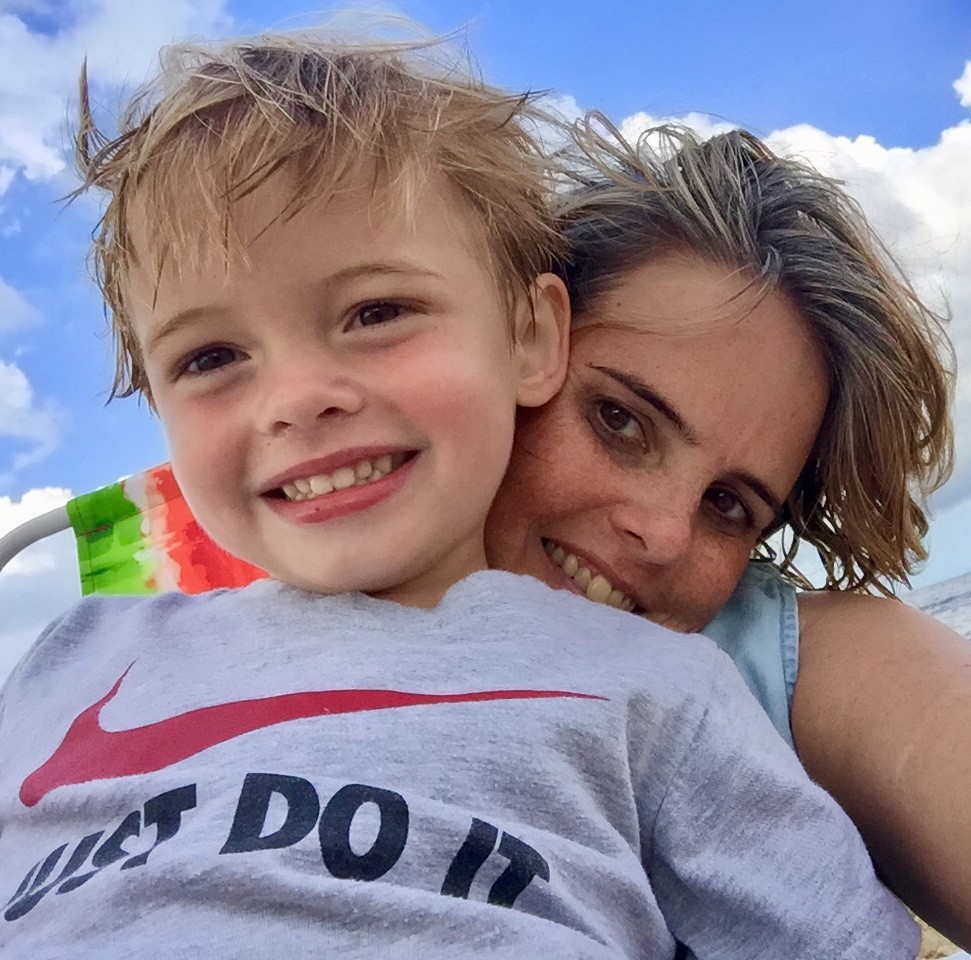 Cancer free and loving time with my P.D.!