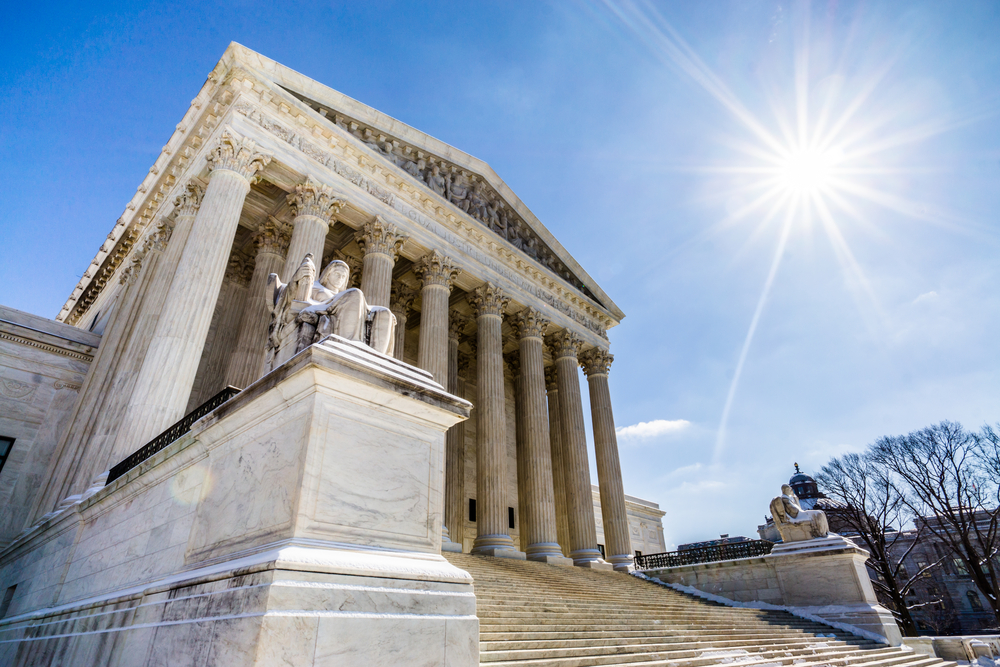 All three non-profit leaders explain what they’re doing to rein in an administrative state that all too often acts beyond its jurisdiction. In particular, the guests explain Sackett v. EPA; Cargill v. Garland, et al. and Myra Brown v. U.S. Department of Education, respectively.

Sackett Family Fighting to Build On Their Property

Pacific Legal Foundation since its inception as a public-interest-law firm in the 1970s has accumulated a whopping 14 Supreme Court victories and counting. The Supreme Court in October heard oral argument in ongoing case Sackett v. EPA and decides the case this June.

“Mike and Chantell Sackett have been trying for 15 years to build a house in rural Idaho but the EPA says that they have water on their property that’s subject to the federal court’s jurisdiction under the Clean Water Act. As a result, they haven’t built anything there in those 15 years.”

Pacific Legal Foundation for years has represented the Sacketts, winning a unanimous Supreme Court decision in 2012 which ruled that the couple did indeed have the right to challenge the EPA over its overreaching “navigable waters” claim to their Idaho property.

“The Sacketts are part of a club you don’t want to be a part of and that is repeat appearances before the Supreme Court,” he says. “We won their case 10 years ago … and we were back in October for Justice Jackson’s first argument as to the size and scope of the Clean Water Act.”

If the team at Pacific Legal Foundation wins in Sackett v. EPA, the upshot it huge. It would mean the individuals and families that altogether own millions of acres nationwide will no longer have to wade through bogus and costly claims that their property is protected wetlands.

“Should we win this case,” says Anderson, “This will open up millions and millions of acres of property across the country for development, allowing people like the Sacketts to build a simple house, like they’ve wanted to for the past 15 years.”

Another of the cases on the Pacific Legal Foundation agenda is that of Larry “Wil” Wilkins. Mr. Wilkins and his neighbor, Jane Stanton, together are suing the federal government for encroaching on their respective Montana properties, located in the Bitterroot National Forest.

Not all cases seeking to keep the administrative state in check, however, make it to the Supreme Court. Take, for example, Cargill v. Garland, et al. The case challenges the Bureau of Alcohol, Tobacco, Firearms and Explosives’ attempts to rewrite federal law regarding machine guns.

Chenoweth and his team at New Civil Liberties Alliance provide a check on the executive branch and, among other things, challenge agency actions that violate the separation of powers clause in Article 1, Section 1 of the Constitution. This bump-stock case is no exception.

“What we have said is ‘The ATF can’t ban bump stocks. It can’t reinterpret a 1986 statute that banned machine guns in a way that says ‘Well, you know, bump stocks are machine guns.’ Well, first of all, they’re not machine guns and we can talk about that statutory argument,” he says.

Michael Cargill, the plaintiff in the case, is a veteran and firearms instructor who, like thousands of Americans, bought a bump stock in 2018—a year before ATF bureaucrats arbitrarily decided bump stocks are machine guns and Cargill therefore subject to criminal charges.

“But the bigger question is ATF just doesn’t have the authority to do that. If you’re going to do something that would turn half a million people into felons overnight that really needs to come from Congress. Congress needs to be the one to write the criminal laws,” says Chenoweth.

The unlawful power grab, according to NCLA, threatens half a million Americans and opens them up to a criminal charge that carries with it a 10-year prison sentence if found guilty. ATF, says Chenoweth, clearly exceeded its authority, and the Fifth Circuit Court of Appeals agrees.

“So, we suspect that the Department of Justice will appeal this case to the Supreme Court and that the court will agree to hear the case given that circuit split,” says Chenoweth. “But, for right now, the case is jut in the fifth circuit so it covers Texas, Louisiana and Mississippi.”

Job Creators Network isn’t a public-interest-law firm, like Pacific Legal Foundation or New Civil Liberties Alliance, but in October filed a lawsuit against the Department of Education for unilaterally announcing a student-loan bailout. The case heads to the Supreme Court on Feb. 28.

“Our lawsuit features two plaintiffs who are directly harmed because the Biden administration violated the Administrative Procedures Act, as I discussed earlier, and deprived them of their right to basically share their opinions on the program through notice and comment,” says Parker.

Brown, for example, has commercially held debt that’s ineligible for forgiveness because it’s not in default and Taylor didn’t receive a Pell grant as part of his financial package. They would’ve liked to have voiced these concerns instead of being dismissed right of the bat.

What’s the connection, though, between pushing back against government overreach and an organization that primarily exists to help small businesses? Parker says the prospect of a $400 billion government-loan-forgiveness program poses economic risks and is imprudent especially during a time when inflation is at an all-time high.