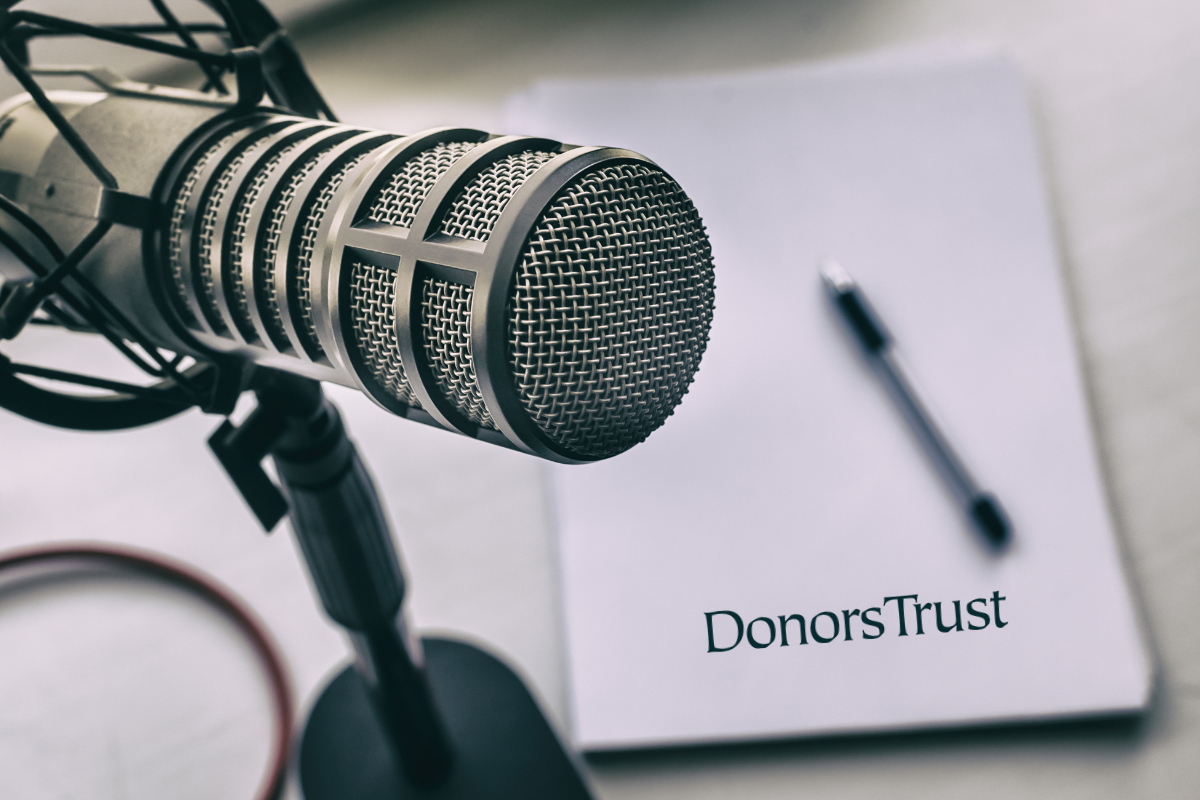 In the ninth episode of our Giving Ventures podcast, titled “Leveling Up Our Civics Education,” host and DonorsTrust Vice President Peter Lipsett talks with Jeremiah Lorrig, deputy director of Generation Joshua; actress Janine Turner, founder and co-president of Constituting America; and Jonathan Greenberg of the Jack Miller Family Foundation, who runs point on a three-group effort called the American Civics and History Initiative, about what they are doing, respectively, to create engaged citizens.

The three groups featured in this episode are civics all-stars. They represent the groups selected as the best from among a pool of programs featured by the Heritage Foundation’s “Level Up Civics” project for their outstanding work in promoting and preserving the principles of American citizenship. If civics education is a priority for your giving, watch the whole presentation of the National Civics Expo here. The Expo featured 14 groups from across the country each giving three-minute presentations about the programs they offer (and you might recognize the emcee!).

There are numerous organizations working to instill the principles of liberty in students nationwide. Not least of these is Generation Joshua, a project of the Homeschool Legal Defense Association dedicated to educating middle- and high-school students about American civics.

Generation Joshua Deputy Director Jeremiah Lorrig, who has worked for the grassroots lobbying organization for nearly a decade, says individual citizens call the shots and are in the driver’s seat—if only they’ll take the time to learn their history and stand up for what they believe in.

“Of course, a lot of people—when they think of leadership—they think of George Washington or Alexander the Great or, you know, these famous names. But, oftentimes, in a democracy like we have in the United States, citizens are the leaders,” says Lorrig.

“Our Constitution starts with ‘We the People’ and so Generation Joshua is formed around the idea that ‘We the People’ need to pass the torch of leadership from one generation to the next again and again.”

Generation Joshua achieves this by facilitating a number of different programs geared toward educating students about the value of citizenship, what it means to be a citizen and what students can do with that gift of citizenship.

Their community-focused learning environment includes a newer program called the Leadership Academy, a “gap year” program for high-school graduates before college. The program plugs them into Generation Joshua’s activities, teaching them to be leaders in its program.

What’s more, the fruit of these classes and workshops are abundant, says Lorrig, adding one participant, “Tim,” started out writing letters to the editor as part of a Generation Joshua assignment and subsequently became the youngest state legislator ever elected in the state of Indiana.

Other Generation Joshua alumni volunteer at soup kitchens; host candidate debates and town halls; organize relief efforts in the wake of natural disasters. “These kids are incredible because they’re willing to look at the mess around them and say ‘What can I do?’”

‘How Do I Write A Petition?’

Actress Janine Turner of Cliffhanger fame likewise uses the resources available to her and Constituting America Co-President Cathy Gillespie to educate and engage students about what they can tangibly do to create real and meaningful change in their communities.

Constituting America facilitates educational programs in classrooms nationwide. Its programs vary but all educate students about constitutional rights. One is a “scholastic study” in which students read essays written by some of the foremost constitutional lawyers in the country.

“One of the things that has been sort of our laser focus as we move forward with this mission is to really have hands-on experiences with the kids in the classroom where they learn how to be an active citizen: ‘How do I write a petition?’ ‘What are my First Amendment rights?’”

What makes Constituting America unique, however, is its scholarship program and the opportunity the contest gives students to learn civics through mixed media and the performing arts. Students, for example, create public service announcements that receive national exposure. In an era when a common career goal among teens is to be an “influencer,” these programs offer a chance to at least be an influencer toward the ideas of freedom!

While the teams at Constituting America and Generation Joshua educate students, the American Civics and History Initiative equips teachers with the resources and teaching curricula for American history and our nation’s founding principles.

“I think it’s been a remarkable success,” Jonathan Greenberg, director of freedom initiatives at the Jack Miller Family Foundation, says of the project’s joint programming. “I think we’re over 6,500 teachers that we’ve reached in total.”

The project is a partnership with three groups with strong track records in helping teachers teach founding principles. These groups are the Bill of Rights Institute, the Jack Miller Center, and the Ashbrook Center at Ashland University. Each offers seminars and courses to kindergarten and grade-school teachers and nurtures those relationships even after an educator has attended his or her first seminar. Now, working together, they can do even more.