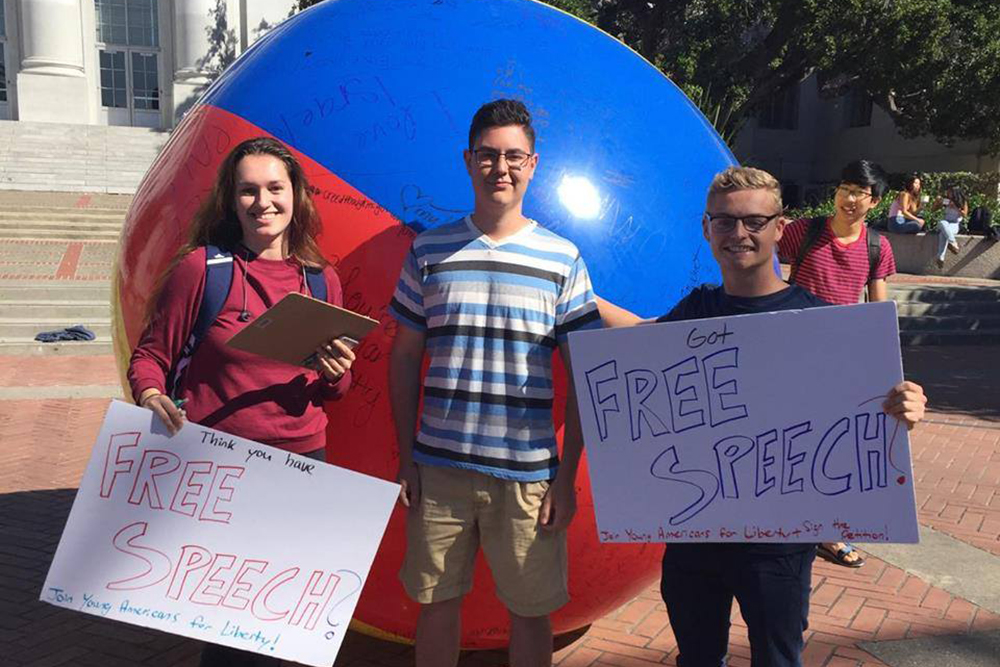 Free Speech & The Competition Of Ideas

Each month, an expert from the liberty movement shares thoughts on how we might be more strategic in our charitable giving. This month, Dr. Wolf von Laer of Students for Liberty shares how we can partner with the student organizations fighting for first amendment rights on American campuses.

Organizations that promote the ideas of liberty must embody intellectual honesty. Doing so is not only important to their success, but also to our supporters.

For the liberty movement, we must hold ourselves true to one of our most important and virtuous rights: the freedom of expression.

The Freedom of Speech

As defined by the Newseum Institute, the freedom of expression “refers to the ability of an individual or group of individuals to express their beliefs, thoughts, ideas, and emotions about different issues free from government censorship.”

In other words, it’s the marketplace of ideas.

The liberty movement has long fought for and defended this principle. From supporting First Amendment rights on college campuses to pushing back against marketing bans, our movement is unparalleled in its support for free speech.

In order to continue this, however, we must not fall prey to populist behaviors such as the tendency to listen to a single viewpoint, provoke those who differ with us, or vilify our intellectual opponents. Instead, we must focus on facilitating civil discourse about our ideas and how they solve the problems of society. There is too much yelling on U.S. campuses, in Congress, and in society in general. We may have the correct ideas, but we have to be the better people, too.

We must continue our absolutist support for free speech and ensure that our messaging, our allies, and our donor communications reflect such efforts. Our effectiveness relies on it.

Today, college campuses have generally strayed away from their traditional roles as the home of a free academia, and instead coddle their students with politically sensitive speech, watered-down education, and group-think. That’s a danger to free societies.

As the CEO of Students For Liberty (SFL), I know first-hand the impact of policies that erode the freedom of expression. There are plenty of court cases in the United States about students being targeted by college administrators for handing out Constitutions on campus, writing pro-liberty op-eds, forming pro-liberty groups on campus, or even expressing dissenting opinions in class.

Many of our thousands of students in the US and around the world are affected by it. Internationally, student freedom fighters are protesting for basic political speech rights in Venezuela, combating academic bias in Europe, and facing jail time in Russia for simply hosting a book club.

These realities raise the question: Is our movement effective when pro-liberty students on college campuses can barely foster a civil and productive dialogue?

The answer is most likely no, but there is hope for the future.

Investing in the Future

SFL is active in over 100 countries, having hosted 1,000 events in the past twelve months attracting over 43,000 attendees. Our young activists are spreading pro-liberty literature on campuses that desperately need ideological diversity. They’re fighting for our ideas on the front lines. However, they are “fighting” for these ideas by building bridges, listening to other viewpoints, and respectfully challenging advocates of big government.

The liberty movement has its bases covered, and is cooperating in more explicit and tactical ways to ensure an outcome that benefits a free society.

As advocates of free markets and free societies, many people in our movement have read and analyzed our opposition’s thinkers. This includes Karl Marx, John Maynard Keynes and others. But this isn’t simply a practice of the past; we must continue to equip ourselves with the mindset of those who differ with us. We must read, for example, the works of Herbert Marcus, who is behind the intellectual arguments for speech censorship. We must know and understand why many favor protectionist trade policies and restrictions on expression and exchange. And we must hold our friends in the movement accountable for the same. This ensures intellectual honesty. We owe it to our ideas.

As the great economist Frederic Bastiat said, “the worst thing that can happen to a good cause is not to be skillfully attacked, but to be ineptly defended.”

One can only effectively defend the ideas of liberty if they understand where the opponent is coming from and what intellectual ammunition they are using. It is our duty to know all possible attacks against our ideas and all plausible diversions from the facts. By embodying this intellectual honesty, the liberty movement can achieve great success. Moreover, one if the most important virtues of our philosophy is the ideas of self-sufficiency and independence. In order to achieve that, we must ensure that we are being the best individuals we can.

To put it simply: We need to stop trolling, stop hating, and stop attacking. Rather we need to start improving ourselves, start learning more, and start setting a positive example for free speech in our own communities.

Dr. Wolf von Laer is Chief Executive Officer at Students For Liberty. Wolf received his PhD in Political Economy from King’s College London for work focused on entrepreneurship, the political economy of crisis, public choice and Austrian economics. You can find some of his publications, including a book, several book chapters and a peer-reviewed journal article on his website www.wolfvonlaer.com. He co-founded European Students For Liberty and served as its chairman.