Many of us think the government has its hand in our pocket. Brad Scott and Hillary Halstead Scott know it does.

The couple own and operate Halstead Bead, a nearly 50-year-old family business in Arizona. Because they serve a nationwide customer base, however, they have onerous tax compliance requirements from many different states. In particular, they estimate it costs them over $11,000 annually just to comply with Louisiana’s tax code.

“So far, we have spent $297,000 on sales-tax compliance. Since we started collecting sales tax, we’ve collected about $127,000 in sales tax. So, we’re spending $2.28 for every dollar that we collect. I’d rather just send the blank check to the states and not have to do the collection,” says Brad

Rather than refuse service to customers in Louisiana, however, Brad and Hillary are punching back. They started pounding the pavement years ago, looking for public-service organizations that would go to bat for them over Louisiana’s draconian and arbitrary tax structure.

Enter the  National Taxpayers Union Foundation. As Joseph Bishop-Henchman, NTUF’s vice president of tax policy and litigation, said, “Faced with the choice of complying, walking away from selling in Louisiana, or going to court, they chose to go to court and we’re proud to be standing with them.”

The NTUF team  recently filed suit in federal court against the Louisiana Secretary of Revenue and local parishes (e.g. counties) over these arbitrary tax systems. They argued that these rules drive up  the compliance costs not just for the Halstead family but for small-business owners throughout the state and the nation.

Beads are no small business in Louisiana thanks to its famed Mardi Gras celebrations but, as Joe explains, if Brad and Hillary want to accept purchase orders placed in Louisiana, they’re “expected to register with over 50 different local parishes,” all of which have different sales-tax forms. 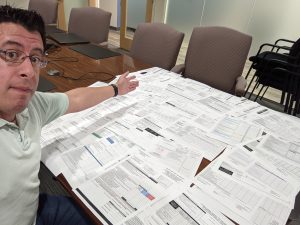 Hillary says she knows she isn’t alone and that other fellow business owners  are similarly tired of the burdensome tax regulations. They, too, feel the weight of these tax regulations and the liability they could face if they unwittingly make an error when endeavoring to comply with the codes.

“They are feeling just as stressed and overwhelmed as we are. They feel just as threatened by the liability of all these different states and jurisdictions. We need to see meaningful reform and, if a lawsuit is the best way to move that forward, then we’ll do it.”

Thanks to NTUF’s law center – one of a burgeoning crop of liberty-focused law centers housed within think tanks and non-profit groups around the country – Brad and Hillary have a chance to preserve their family owned business for years to come.

More importantly, a court victory could ensure that other small-business owners are able to operate in a regulatory compliance environment increasingly hostile to them.

“Unfortunately, what I see is they are criminalizing a small business normalcy because we’re not so sophisticated as to be able to operate like an Amazon or a Walmart would. We don’t have the tools, we don’t have the resources but we still have the same compliance demands,” says Brad.

Brad wears  many  hats at the business, serving, for example, as its accountant, human-resources manager, and compliance officer.. He’s no stranger to the albatross that is government, even at the local level. Brad and Hillary, however, have learned how  to fight for a simpler tax code for small businesses.

“Through connecting with NTUF and other organizations, we learned there are ways to use lawsuits to advocate for change, to advocate for simplicity,” said Hillary. Among those changes the team at NTUF is advocating for in their lawsuit is a streamlined tax-collection process.

“At a minimum, we’re asking that Louisiana do what 40 other states have done and that is have a single point of contact for their [revenue] collection—have a single set of rules so that, at most, a small business has to worry about 44 different states, not 10,000 different local jurisdictions,” says Joe.

Read more about the Halstead’s case here and listen to Brad and Hillary’s story in their own words below: