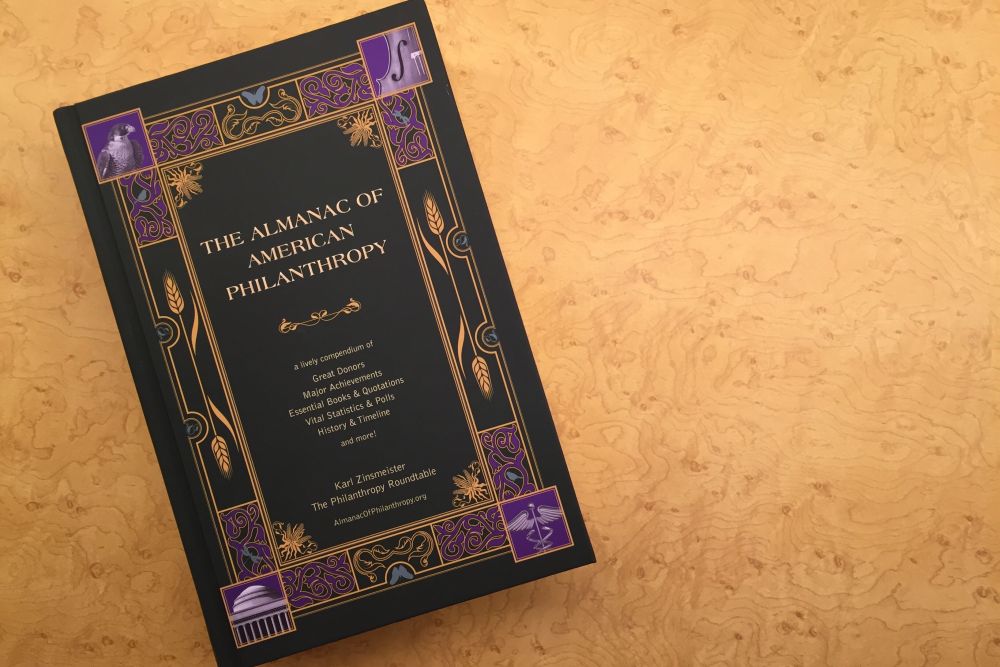 Power of Philanthropy Shines Through in New Almanac

Last week, a weighty box arrived in my office. I was immediately excited. Inside, I knew, was my own copy of the new Almanac of American Philanthropy, authored by Karl Zinsmeister and published by the Philanthropy Roundtable.

The Almanac runs just over 1,300 gold-leaf pages that are filled with the stories of the charitable forces that have shaped America. No other book chronicles the extent to which private philanthropic action has changed the face of the country for the better.

These stories recount more than the building up of well-known charities such as the Boys & Girls Club (by a former U.S. President, no less – see page 682) or the March of Dimes (page 332). We are reminded that private philanthropy played a role in discovering new technologies or promoting positive change that most people might presume came out of industry or government. Some examples:

It’s inspiring to see what is possible when philanthropists of all stripes and at all levels of capacity use their resources to better society. Private philanthropy is uniquely suited to take on problems in an individualized way, using local know-how to solve local problems – and then, when possible, scaling those solutions into new areas.

More than great stories, Zinsmeister makes a compelling case in the opening pages of his book for the value of private philanthropy and the critical role it plays in society. At DonorsTrust, where we place such a high emphasis on private charitable action over government support of charities, this was especially nice to see.

He explores the obvious and not-so-obvious benefits of charitable giving and counters common criticisms of philanthropy. My favorite of these criticisms is that “some donors aren’t so nice.” Indeed, he highlights some truly awful humans who did truly great things.

“And here’s the fascinating secret of philanthropy: Charity doesn’t have to come from people who are charitable. You don’t need to be an angel to participate. In fact, motivations of any sort aren’t that important. The genius of the philanthropic mechanism is that it takes people just as they are…and it helps them do wondrous things, even when they’re not saints.”

Zinsmeister also reminds us that bad charitable programs tend to go bust or wind down, with private charitable dollars going elsewhere (see the sad case of the PlayPump in Africa). “When was the last time you saw a dumb government program die?” he asks.

The Almanac of American Philanthropy is more than beautiful book (and which, quite charitably, is fully available to read online). It is a valuable addition to the life of anyone who believes in the power of charitable action.