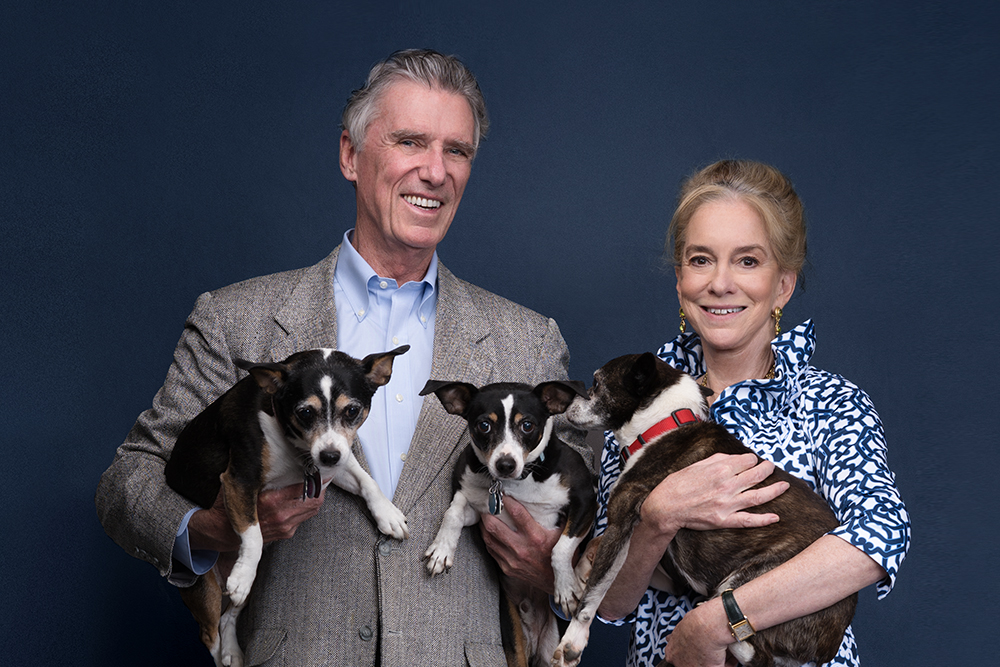 How the Walton’s Bridge Traditional and Policy Charitable Interests

Our Client Stories series continues with Bill and Sarah Walton. In a recent interview, they shared how having a donor-advised account with DonorsTrust allows them to support the causes within the community of liberty that they care about. You can read last month’s installment featuring Sue Scharf here.

Bill and Sarah Walton have been with DonorsTrust since 2014. Bill is the former CEO of Allied Capital and now is managing partner of Rappahannock Ventures. Both he and Sarah are active in a variety of philanthropic pursuits. In this interview, they discuss how they focus on creating both a powerful impact and legacy with their giving.

You support a diverse list of  groups. What is the unifying idea behind your philanthropy? How do you see the public policy giving that you do relates to your non-policy giving?

Bill: Sarah and I joke that our modest goal is to save Western civilization. That includes promoting free-markets, economic and religious liberty through organizations such as Heritage, AEI, Cato, Leadership Institute, the Discovery Institute, Media Research Center, and Family Research Council.

We also care a lot about preserving our culture and give to arts organizations like the National Gallery of Art, the National Symphony Orchestra and Wolf Trap, where I’ve also served on their boards.

Recently, we have become very interested in habitat and species preservation. I see proper preservation of habitats as part of preserving our culture.

Sarah: One of the thing about Bill’s podcast [the Bill Walton Show] is that he has people on advocating things we never thought about.

Bill: I had a man on recently who is working to save the African elephants. This led to exploring habitat protection generally, and we learned there are very big problems. This is a man-made issue and we can do something about it.

Sarah: We had no idea it was so dire.

Bill: Right now our giving is spread across dozens of groups. Some people choose to go focused. Ken Fisher was on the show recently, and he has essentially one interest – western conifer tree science. Now that’s focused. I feel we could do better with a sharper focus.

As an investment guy, I should be more systematic, but I don’t yet have a model for how to advocate giving this much money to this type or that type of group. Maybe next year.

What skills from your business career are most valuable to your philanthropy?

Bill: My private equity investing background comes in handy because when it comes to the types of groups I like, I’m looking for those that do have a high degree of focus, as well as a track record of bringing about results. I want to see that they’re led by a competent CEO, who is mission driven and able to articulate what the organization is about.

You mentioned one of your priorities is results-oriented organizations. What does that look like to you?

Bill: Exhibit A is the Media Research Center, which is exceptionally well led by Brent Bozell. They take on issues laser-like, where’s there’s media bias, and will get its networks activated to throw sunlight on fake news. Jenny Beth Martin of the Tea Party Patriots does a great job of getting grassroots organized around issues like the Iran Deal. Tom Fitton at Judicial Watch is another example. I am in the trenches with a lot of these organizations, and so I tend to give money to those I know are getting the job done.

How do you handle giving to dozens of groups?

Bill: One of the things that is nice about DonorsTrust is that they help with my strategy of giving small dollars to a group, sort of like seed venture capital, and then if I like what I see, I can go on to larger dollars. Smaller dollar donations, writing checks and dealing with all that, can be a hassle and DonorsTrust takes care of all of that.

Sarah: When Bill was working at Allied Capital, every year we gave away more money than we spent on ourselves. Buying stuff doesn’t make you happier, but seeing our money go to the causes we care about does.

Bill: I’m giving a talk [soon] on a panel called “How to Win: Untapped Resources for Igniting the Right’s Resources.” It is about how we steer money to organization advancing liberty. It is a dispiriting conversation for me because there seems to be so much infighting and competition in the conservative movement. Instead of igniting the right’s resources, we tend to be in competition for them, and as a consequence we don’t work together that well in the same sandbox.

Sarah, do you have your own separate charitable priorities or do you tend to do your giving together?

Sarah: I really like being involved with the National Gallery. The price of art is so high now, even photography, but it’s just pleasure because I like art and appreciate how the Gallery makes it accessible to so many.

In Little Washington and Rappahannock County [Virginia], there are lots of charities. It is a rural community, and we can have a big impact locally.

How did you two come to DonorsTrust?

Bill: I heard about Whitney [Ball, DonorsTrust’s founding president] and the concept at the same time. Whitney was very charismatic and I liked what she was doing and I liked the concept of DonorsTrust serving as a sort of an outsourced foundation for me. DonorsTrust does due diligence on the kinds of organizations I want to give to, has a big database and great administrative procedures, and I like the focus. Most foundations and most donor-advised funds are on the Left.

The 20-25 groups that I like to support are mostly all in your database. It is very simple to get on your website and request a grant. The information is all there. You’re handling all the administration and record-keeping. The organization you have in the database are a great roundup of all the groups I want to give money to.

How do you think about planning out a charitable legacy?

Sarah: One of the things I’ve noticed is that people give money to things and the organization changes, so it isn’t at all what people thought they were giving their money to. I was briefly involved with Corcoran, and now it is dissolved.

Bill: Determining what an organization will be doing twenty years from now is a big issue. Donor intent is a big problem. I think most people should view legacy giving as thorny. It certainly is for me. I didn’t start out with any money and now that I have some, it’s hard to explain to people that it can be a problem, trying to see that it does some good. Steering it to end up in good hands is very difficult. That is where DonorsTrust can be very helpful.