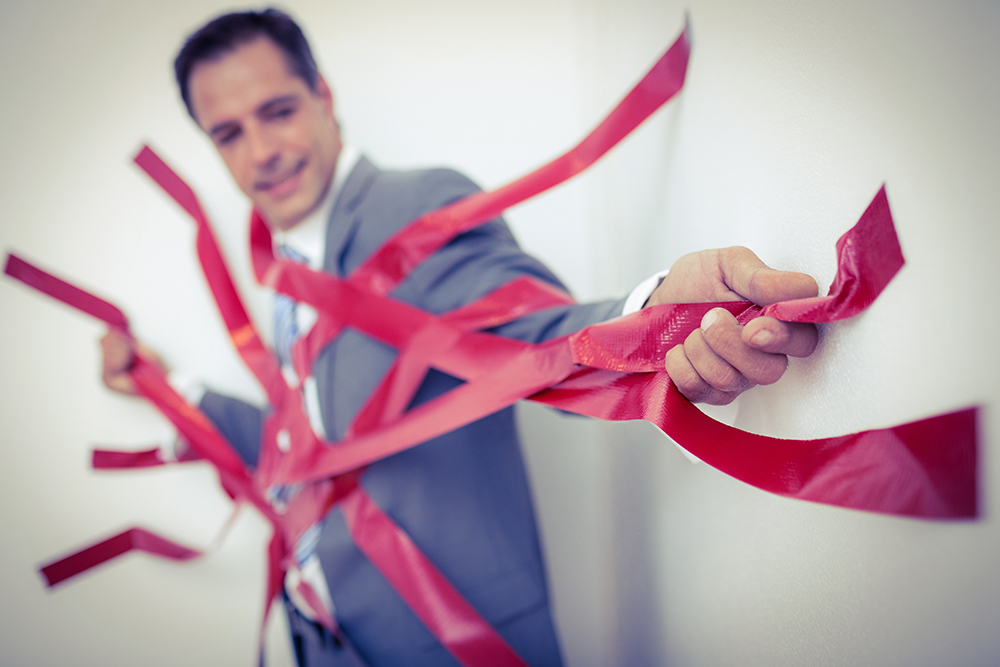 As a continuation of our Expert Giving series, we asked Adam Brandon, the President of FreedomWorks, to frame the current landscape around government regulation and to share his advice on how donors should think about regulatory reform and the different approaches organizations are taking.

In school, we all learned that Congress makes the laws. Even Schoolhouse Rock sang to children about the legislative process in their famous song, “I’m Just a Bill.” Though it has been years since I watched that video, I don’t remember it mentioning anything about the thousands of unelected and unaccountable bureaucrats who are shaping national policy behind closed doors.

Over the span of decades, Congress has created and delegated increasing authority to various departments and agencies in the executive branch, forming an unofficial “fourth branch” of government: the regulatory state.

Regulatory agencies hold arguably more power than Congress, but with less transparency and almost no oversight. Policy is decided behind closed doors among a staff whose names we’ve likely never heard of, outside the watchful eye of Congress, C-SPAN, and taxpaying citizens.

The power wielded by these strangers is chilling. The Code of Federal Regulations is over 175,000 pages long. If we printed each page and laid it down end-to-end, it would measure over 25 miles long. The world’s fastest runners would need at least two hours to cover that distance – imagine how long it would take a small-business owner to read it.

How Did We Get Here?

Before investing in a solution to the regulatory state, it’s important to understand the root causes of the problem.

There is a high barrier to entry for the average American looking to shrink the size of government. The power players in Washington have access to knowledge and information that doesn’t get shared with the American public, unless they show up and demand it. As we all know, there are only so many hours in the day.

Main Street America is not uninformed – they just don’t have time to read 175,000 pages of federal regulations, or to track the public comment deadlines for every relevant issue. People are busy going to work, driving the kids to soccer practice, and putting dinner on the table.

Legislators and bureaucrats recognize this reality and use it to their advantage to continue wielding unaccountable power, knowing most Americans won’t even notice.

In addition, Wall Street cannot always claim to have the moral high ground. Many businesses today have lost their belief in free enterprise, and have used the legislative and regulatory process not to reduce barriers, but instead to raise protective walls that reduce competition, and ease their ability to turn a profit. And citizen consumers lose out due to this corporate cronyism.

It’s the job of conservative think-tanks, watchdogs, and activist groups to correct this power imbalance. Thanks to the internet, we’ve already started.

A variety of organizations play different roles in supporting the conservative movement online. Donors looking to fight the regulatory state can explore their options in a few simple investment categories.

Reasearch institutiions such as the Mercatus Center, and the Regulatory Studies Center at George Washington University, work closely with the Heritage Foundation, American Enterprise Institute, and the Competitive Enterprise Institute to act as the brains of the conservative regulatory fight. These organizations research policy issues and develop white paper analyses to intellectually fight bad policy. Think-tanks play a valued role in educating the public on what specific regulations are hurting the country most, and how.

Activist groups like Club for Growth, Americans for Prosperity, and Young Americans for Liberty are the muscles of the conservative movement. Their operating models will vary. Some groups invest heavily in radio and television ads, or organize boots-on-the-ground activists to petition government directly. Other institutions such as Institute for Justice and CEI use the legal process to challenge onerous or anti-competition regulations at the local, state, and national level. In all approaches, activist groups move quickly, taking the fight to Washington in the moments that matter most.

Groups like FreedomWorks are taking a hybrid approach to fighting the regulatory state with education-action initiatives like the Regulatory Action Center (RAC) that directly feed action. This program, led by former Virginia Attorney General, Ken Cuccinelli, is quickly becoming the conservative movement’s main driver of public comments on federal regulations.

The RAC relies on real-time monitoring of pending rules and regulations from 300 federal agencies and departments. When a time-sensitive regulation arises, it sounds the alarm, connecting FreedomWorks’ existing community of over 5 million grassroots activists with the combined knowledge of academics, nonprofits, industry groups, and state attorneys general to oppose regulatory intrusion across the country. The program translates policy white papers into easily digestible talking points, teaching activists how to craft constructive public comments, request and attend agency field hearings, and provide live testimony before regulators through a combination of digital and in-person training.

Issues to Consider Before Investing

The public comment period is the only time the American people can make an impact during the regulatory process. To stop new regulation and reverse existing regulation, you must strike while the iron is hot.

2)    Are these efforts effective?

Anti free-enterprise groups bombard federal agencies with form letters, but administration officials are wise to the spam game. Bureaucrats directly involved in these processes have admitted that one unique and substantive comment is “often more influential than a thousand form letters.” The FreedomWorks RAC initiative, for example, has generated over 100,000 unique and substantive comments to date.

3)    What are the short and long-term benefits of this investment?

It’s important to make sure every campaign is building toward the next campaign. To create a lasting grassroots constituency for limited government, activists must genuinely understand the process, think critically about policy issues, and develop the communication skills to effectively speak truth to power. Activist training programs build a community of educated and engaged citizens ready to battle regulation for years to come.

The growth of the regulatory state is a bipartisan problem, and it wasn’t built overnight. Current political realities may offer some promise to get serious regulatory reform done.

Much like the comment period for a federal regulation, organizations – and therefore donors –  have a limited window of time to engage the public in achieving profound regulatory reform. Whether you invest in education or action, or groups that weave both approaches together, there are many important opportunities for you to engage in the fight to restore free enterprise.