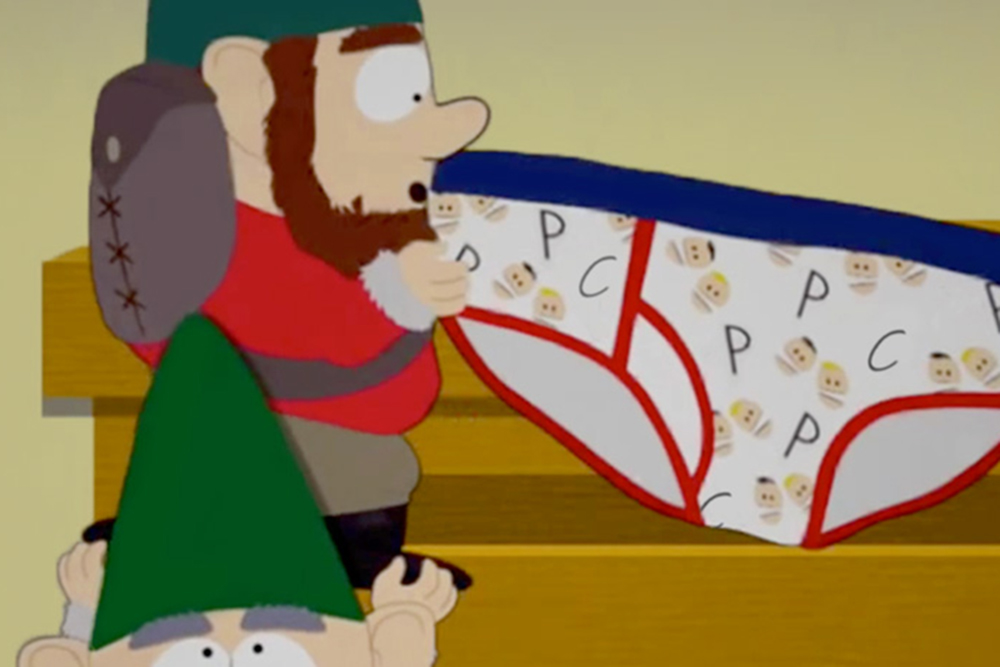 This year, you will become a philanthropist.

I know it is possible, and you and the world will be better off because of it. And to get there, let’s follow a well-documented scientific theory: the Inverted Underpants Gnome Strategy.

Before we outline that strategy, though, let’s talk about habits. The idea of upping our charitable giving – or making any sort of change in our lives – starts with a plan now, not later.

James Clear says in his excellent book, Atomic Habits, “Too often, we convince ourselves that massive success requires massive action.”

To be a better charitable giver, we need to find a system that will shave away the friction of being able to give more. With such a system, we evolve from a “mere” donor to a strategic philanthropist – someone who gives smart, even if they aren’t giving a ton.

Ladies and gentlemen, that system is the Inverted Underpants Gnome Strategy. Let’s dive in.

South Park introduced us to the Underpants Gnomes – friendly little gnomes that steal underpants for profit. Yet when questioned about their plan for their mountains of collected underpants, the gnomes are a bit stumped. They offer this genius plan, which reflects many business designs out there:

The Inverted Underpants Gnome Strategy turns the entire idea on its head. It goes like this:

Phase 1: Create an auto-draft from your bank to your charitable savings

Let’s unpack that this a bit.

Ok, Phase 1: Create an auto-draft. It doesn’t roll off the tongue like “collect underpants” does, but it’s more valuable. You create a set-it-and-forget-it auto-withdrawal from your bank account, with the money going to wherever you accrue your charitable savings.

There are two critical parts here. Working backward, you must have a place that is separate from your normal checking account to build up your charitable reserves. If you think you’ll be cool saving up your $100/month for charity in the bank account, then your biggest charitable “donations” will likely be buying Starbucks for friends.

Options abound on where to put that money. One friend of mine simply set up a savings account with the same bank as her checking account. I used to use an online bank, creating a “Charity” savings account next to our other accounts. Another option, and the one I now use, is a donor-advised fund through the Novus Society. A donor-advised fund has the added benefit of giving me my tax deduction immediately instead of running the risk of getting to the end of the year and not having given out my gifts in time to count.

The other critical piece is setting an auto-draft so you don’t waste brain power (and, more dangerously, will power) each month to move that money. Let it happen in the background. Automating your finances is the best way to build wealth (and good habits) while eliminating any guilt about the expense (see Ramit Sethi’s guide to automating your finances here, or just buy his book – worth every penny).

Most banks have a bill-pay system that will generate and send a check wherever you want. That’s a great method if your charitable savings go to a donor-advised fund. If you’re using an online bank, you can simply set up an automatic savings plan.

Work backward from however much you want to have saved by the time you make gifts in December (or whenever you do your giving) and set that much aside each month. Want $3,000 saved by mid-December? Start now, in January, and auto-draft $250 each month (or get fancy and do $125 twice a month).

If only all habits were so easy to build!

Now we get into that most mysterious of phases, Phase 2.

This is where we really invert the gnomes’ strategy. They had no real plan for what to do with all those underpants in order to reach the profiting phase.

Instead of being a series of question marks, our Phase 2 is an ellipse, because our job here is to wait. A pile of charitable giving money is quietly growing in the background, waiting for us to get to that time when we are ready to use it. It’s a habit in stealth-mode.

You still have things you can do in this waiting season, though. One is understanding the sorts of groups you want to give to. Build a list (you’ll check it twice later, in Phase 3). See what motivates and interests you.

The other thing you can do is give! If it’s April and disaster strikes somewhere around the globe, you might feel called to give to help the recovery effort. Unlike past years, where the amount in your bank account capped your generosity, you now have a few hundred bucks set aside for just this moment.

You’ve quietly built up several hundred, maybe even a few thousand dollars, all earmarked for charitable giving. Now comes the fun part – give it away. You’ve been mulling causes you want to support throughout the year. It’s time to act.

If tax deductions aren’t a concern for you, then the true timing here doesn’t matter. Give when your heart desires, though having one or two set times in the year to focus your brain on philanthropy will help you make smarter, non-rushed decisions.

If that tax piece does matter, make sure you get those gifts out the door before December 31st. If you’re worried the end of the year will swoop past you before you will be able to get your giving done, a donor-advised fund can be your best friend.

Either way, the whole point of Phase 1 and 2 is to get to Phase 3: Give. By building up money just for this purpose, you’ll likely find you can give more than you expected to give. That means more impact for the causes you care about, and more positive change in the world.

Expand your thinking this new year, and build a habit that has transformational power. On to Phase 1…