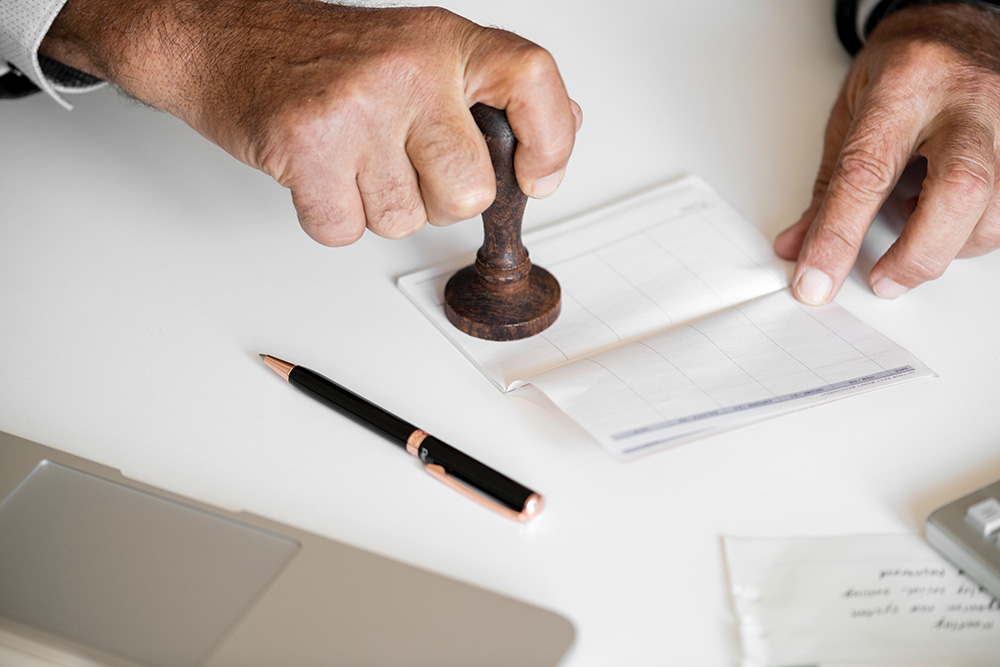 What if you would like to benefit charity, but the need for an income stream makes you hesitant to part with assets you might otherwise give?

A charitable remainder trust (CRT) is just like any other trust – it has a “trust settlor” (or “trust grantor”) who establishes and funds the trust, a fiduciary administering the trust (the “trustee”), and beneficiaries receiving income from the trust and remaining trust assets at the time the trust terminates.

As in the case of any other trust, the arrangement between the three parties is memorialized in a trust agreement. The key differences between a CRT and other trusts are that

(2) the trust “remainder” beneficiaries must be qualified charities,

The primary difference between the two basic categories is how the income payment is calculated. In the case of a CRAT, the payment is based on the value of assets transferred to the CRAT at the time the CRAT is funded. For a CRUT, the annual payment from the unitrust varies from year to year, and is calculated using the value of the assets held by the trust as those assets are re-valued on an annual basis. 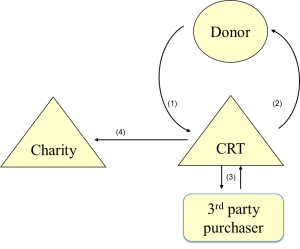 Result of Implementing a CRT

The following table illustrates one possible result from implementing a CRT (structured as a CRUT). The table compares the result of implementing a 20 year term CRUT paying 5% per year, funded with stock valued at $500,000, purchased for $250,000 ten years ago (long-term capital gain property) and sold by the CRUT upon receipt versus an outright sale of the stock. In both cases, the assumption is that the net sales proceeds are re-invested in a portfolio that appreciates at 7% per year, yields 1% annually, and is subject to 10% turn-over each year. Additional assumptions are found at the bottom of the table. 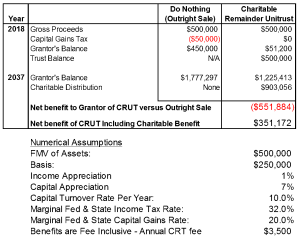 As calculated using the described assumptions, while a philanthropist would accumulate $1,777,297 over a twenty year period if they simply sold the stock and reinvested the net, after tax proceeds, the total amount returned through implementation of a CRUT is $2,128,469 – an increased return of $351,172. In the case of the CRUT, the total return is split between the philanthropist and the charitable remainder beneficiaries – $1,225,413 to the philanthropist, $903,506 to charity.

Why Create a CRT?

Most individuals establish a CRT when they have an appreciated asset they seek to:

(1) diversify in a tax effective manner,

(2) receive an income stream, and

Appreciated, long-term capital gain assets are the ideal candidates for funding a CRT because of the CRT’s tax-exempt status. If a CRT sells an appreciated asset after it is contributed, the CRT pays no capital gains tax. Instead, all proceeds from the asset sale are available for reinvestment. Given this, most individuals establish CRT’s during their lifetime as a method of both setting aside assets for charity during their lifetime while continuing to benefit from those assets while living.

However, charitable remainder trusts are also useful vehicles for establishing a pool of assets to provide a loved one an income stream during their lifetimes, with remaining assets passing to a favored charity when the trust terminates.

Accordingly, you do see CRTs incorporate as part of an estate plan where the CRT is created and funded at the time of an individual’s death in order to provide an income stream to a loved one during their lifetimes (or for a term of years), with assets passing to charity upon completion of the CRT term.

Of course, this can also be done during a donor’s lifetime, as well (i.e., you are free to establish and fund a CRT and gift the income interest to a third party during lifetime). Note, though, that if an individual other than the CRT donor or their spouse is named as a CRT income beneficiary, whether the CRT is created at death or during lifetime, the value of the gifted income interest is subject to gift and estate tax. Of course, gift and estate tax is unlikely to be paid unless total non-charitable gifts made by the individual during lifetime and at death exceed the individual’s estate and gift tax exemption ($11.2 million for 2018, $22.4 million for a married couple).

If a CRT is in your future, consider naming a donor-advised fund (DAF) account as the remainder beneficiary. By naming a DAF account with an advisor you have selected, you can easily change the charity(ies) that ultimately benefit from the assets passing from CRT at the time it terminates.

The advisor to the CRT, or the DAF sponsoring charity, can make distributions from the DAF in accordance with a plan you have discussed and left with the advisor. While it is possible to structure a CRT so that you can change the tax-exempt entities benefitting from the CRT remainder interest, including provisions allowing you do this require you to give up other CRT provisions you might rather keep – such as the ability to serve as the CRT trustee.

Finally, CRTs are flexible vehicles. This post barely starches the surface of how a CRUT can be structured. Indeed, besides plain-vanilla CRUTs, there are NiMCRUTs, income-only CRUTs, and flip-CRUTs. Each of these CRUT variations provide interesting and creative ways of accomplishing both non-charitable and charitable estate and financial planning goals using various assets as funding sources for the CRT.

If you have any asset that you would like to diversify in a tax effective manner, while retaining an income stream from the asset and benefiting charity, a CRT may be a perfect fit for you. That said, because a CRUT must be created and administered, it probably won’t make sense unless funded with at least $500,000 (though a straight forward CRAT or CRUT may very well be justified at a lower funding point).