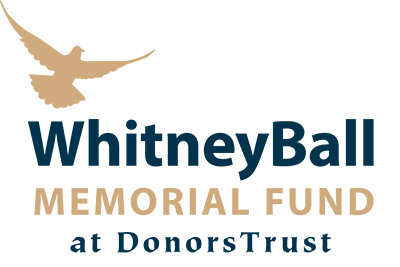 Throughout her career, Whitney Ball profoundly influenced libertarian and conservative philanthropy – most notably as DonorsTrust’s co-founder.

In August 2015, we lost Whitney to her prolonged battle with cancer. During her 15 years leading the liberty movement’s community foundation, Whitney developed dear friendships with many in our community who miss her dearly.

While the act of perpetuating and building the institution of DonorsTrust honors Whitney, much of her vision for what is possible was only just coming to fruition when her life was cut short.  She believed DonorsTrust needed to play a central role in expanding the financial resources available to the libertarian and conservative movement.  As part of that, she hoped DonorsTrust could develop the capacity to jumpstart new initiatives and invest in strategic opportunities to advance the cause of freedom.  She also believed strongly in the need to cultivate a new generation of philanthropists.

In furtherance of Whitney’s vision, DonorsTrust is pleased to announce the creation of the Whitney Ball Memorial Fund. This program opens new doors to growth – for DonorsTrust as an organization, for liberty-advancing non-profits, and for the donors we serve.

The Whitney Ball Memorial Fund will have three primary objectives:

“I know we all feel blessed to have worked closely with this remarkable woman of valor, entrepreneurial energy, principled leadership, loving kindness, and unstinting commitment to liberty.”

The Whitney Ball Society (WBS) will engage with and grow the next generation of philanthropists by offering donor-advised fund accounts with reduced fees, lower minimum opening contribution requirements, and opportunities to award an annual Whitney Ball Memorial grant on behalf of the society. Membership is targeted to young professionals under the age of 40, after which the account holder will “graduate” to a traditional DonorsTrust donor-advised account. The WBS will have its own advisory board comprised of representatives from the leadership of several conservative and libertarian young professional organizations such as America’s Future Foundation, Teneo, and the Lincoln Initiative. These organizations will be active in encouraging their membership to join the society.

The most visible element of the WBMF will be expanded sponsorship of conferences, seminars, galas, and donor-specific events that publicly credit the “Whitney Ball Memorial Fund at DonorsTrust.” Given the cross-generation of friends and supporters who attend many of these events, this is a tangible way to perpetuate Whitney’s name among those who knew and loved her, while simultaneously raising awareness of DonorsTrust and directly supporting pro-liberty groups.

DonorsTrust is acutely aware that the precarious state of our shared principles in today’s political and social climate requires more resources. Whitney hoped that DonorsTrust could have greater discretion to invest in ideas and programs and meet perceived funding holes in the larger libertarian and conservative movement. The Whitney Ball Memorial Fund will strengthen some of our underutilized programs and provide us latitude to be nimble at aiding the larger movement.

The Whitney Ball Memorial Fund, with its various constituent parts, will enable DonorsTrust to grow in a way that strengthens the full landscape of individuals and organizations committed to limited government, personal responsibility, and free enterprise.

The DonorsTrust board and staff are excited for this opportunity to charge ahead under Whitney’s name.

We invite you to join us in honoring Whitney’s legacy as well. To discuss how you can support the Whitney Ball Memorial Fund, contact Lawson Bader or Peter Lipsett at DonorsTrust at (703) 535-3563.

Click below to request a call or email from us on how you can support Whitney’s ongoing legacy at DonorsTrust and in the freedom movement.