“If you intend to dedicate large sums of money to charity, you should think hard about what purpose you want that money to serve…If your intentions as a donor are to be respected, you need to clarify what you want your assets to accomplish and create safeguards that help ensure their intended disposition….You ignore donor intent at your peril.”

You have a vision for your charitable giving. Do those around you share it?

When you are gone, will your charitable legacy remain intact or succumb to the whims of future generations?

Sadly, it is all too common for charitable capital to stray from the original donor’s wishes and the principles of liberty.  This drift away from the donor’s intent can come from a number of sources:

We often think of donor intent being a problem after one’s lifetime, though institutions can fail to meet a donor’s wishes even in life, particularly if the donor does not have the time, energy, or ability to keep close watch on the way an organization uses a gift, or if the donor simply doesn’t know that an organization he or she funds because of one project is separately engaged in many things that he or she opposes.

Established in 1999, DonorsTrust serves as a check against its client’s charitable dollars drifting into areas of which they would disapprove.  DonorsTrust is the sole donor-advised fund dedicated to safeguarding the charitable intentions of conservative and libertarian donors committed to promoting a free society through the ideals of limited government, personal responsibility, and free enterprise. We differentiate ourselves from other community foundations and donor-advised funds by providing a safe, efficient, and principled philanthropic vehicle. 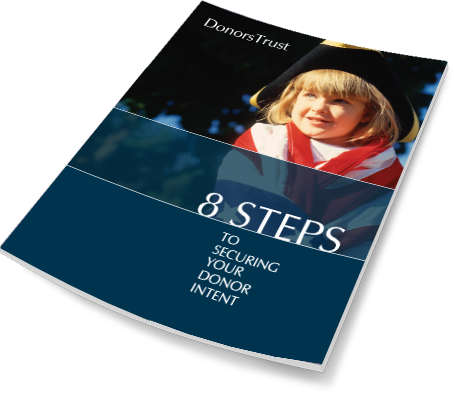 How can you protect your donor intent?  Download your copy of 8 Steps to Securing Your Donor Intent, a step-by-step guide of things you can do starting today to ensure the principles you hold dear get advanced through your charitable giving, both now and in the future.