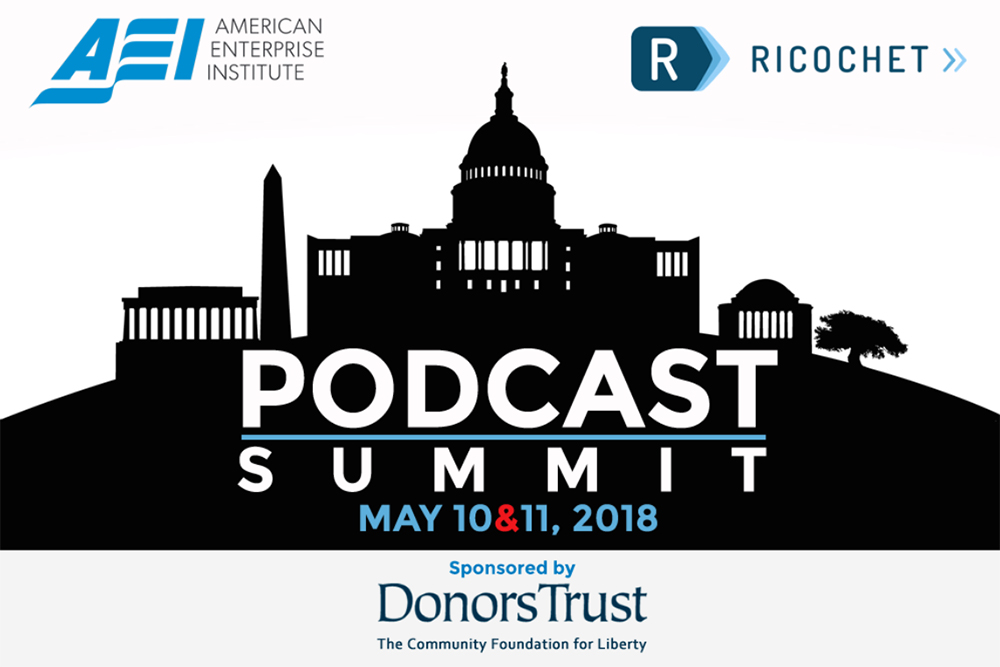 I had the privilege of introducing Jonah Goldberg and, in the process, saying few words about DonorsTrust. I used the opportunity – and the excellent segue of the themes Jonah presents in his new book, Suicide of the West, to talk big picture about the value of charitable giving.

Below are my remarks, lightly edited for readability.

In a few minutes, we will hear from Jonah Goldberg. I have not yet read his new book, Suicide of the West, but I am very excited to do so, because in it he makes a really important argument about both the state we are in as a nation and the path to recovery.

I did read his National Review article that touches on the themes of the book, and I imagine several of you have as well. In it, he refers quite rightly to the natural depraved state of man and then to what he terms “The Miracle,” which is the arrival of Western-style liberal democracy and the ideas of freedom and individual rights and all the other values you and I believe in but so many take for granted.

How do we preserve that Miracle? Well, there are a number of ways we do it. Frankly, being part of Ricochet contributes to it – being a joiner, showing up to meet others who think like you do and build the bonds of community. Being part of a faith community, part of your neighborhood pool, even just being an active participant in the lives of your family.

Jonah continues to remind us of the importance of these little platoons and our involvement in them. But when we are faced with the current tide working against our ideas, it can feel like these efforts aren’t big enough.

And this is where our charitable giving comes into play.

There are two big reasons why charitable giving is so important for preserving the Miracle.

First is how it extends our reach. There are hundreds of non-profit organizations out there filled with people who get up each day to push back on liberal over-reach and promote liberty. There are the big think tanks like AEI, Heritage, Cato, but there are think tanks like this in every state that work to secure good policy ideas and stop the bad ones.

I’m not saying that white papers alone will turn the tide. In fact, the charitable landscape of ideas goes well beyond think tanks, to student training groups like Leadership Institute, or grassroots groups like Americans for Prosperity or FreedomWorks, to public interest law firms like Institute for Justice, and, though it may seem impossible, to organizations adding more liberty-minded professors in the academy, thanks to groups like Institute for Humane Studies and the Mercatus Center.

The second way giving preserves the Miracle is by countering overreach by the other side. At DonorsTrust, we believe in the power of private giving to be a force for public good. Not giving to charitable groups surrenders that ground to government.

I’m not just talking here about giving to the policy groups – all of the groups that advance civil society help secure liberty, from the Boy Scouts to private medical research to churches to arts groups that maybe don’t mock our values.

These are the groups the prove everything the policy groups say – that real people can come together to solve real problems – without massive government intrusion.

I want to encourage all of you to be givers, to support the private groups that both promote policy and bring our values to life. Now, let’s throw out a common belief, which is that you have to be rich to be a philanthropist. At DonorsTrust, we think that being a philanthropist isn’t about how much you give, it’s about how strategically you act.

Last night, we had a reception for DonorsTrust clients up on the roof here. The vast majority of those clients are not uber-wealthy billionaires, though if that’s you we’re happy to be of assistance. No, most of those clients are people who work at or run non-profits or small businesses, or are lawyers, or even have a government job.

In short, they are a lot like most of you. Their donor-advised fund helps them organize their giving. Working with us means they know they have a partner who shares their principles and believe in limited government, personal responsibility, and free enterprise.

We also have a program for younger donors, folks under 40 who don’t yet have a ton of resources to give, but are ready to be smarter in their giving. This is our Novus Society, and some of these folks are joining us here at lunch today.

We’d love to work with any and all of you and be your partner in giving.

Above all, though, I hope you will support organizations fighting each day for the ideals you cherish.

As part of the conference, we distributed copies of Investing in Liberty, our guide to help donors identify new ways to contribute to the cause of liberty. Download your copy here.