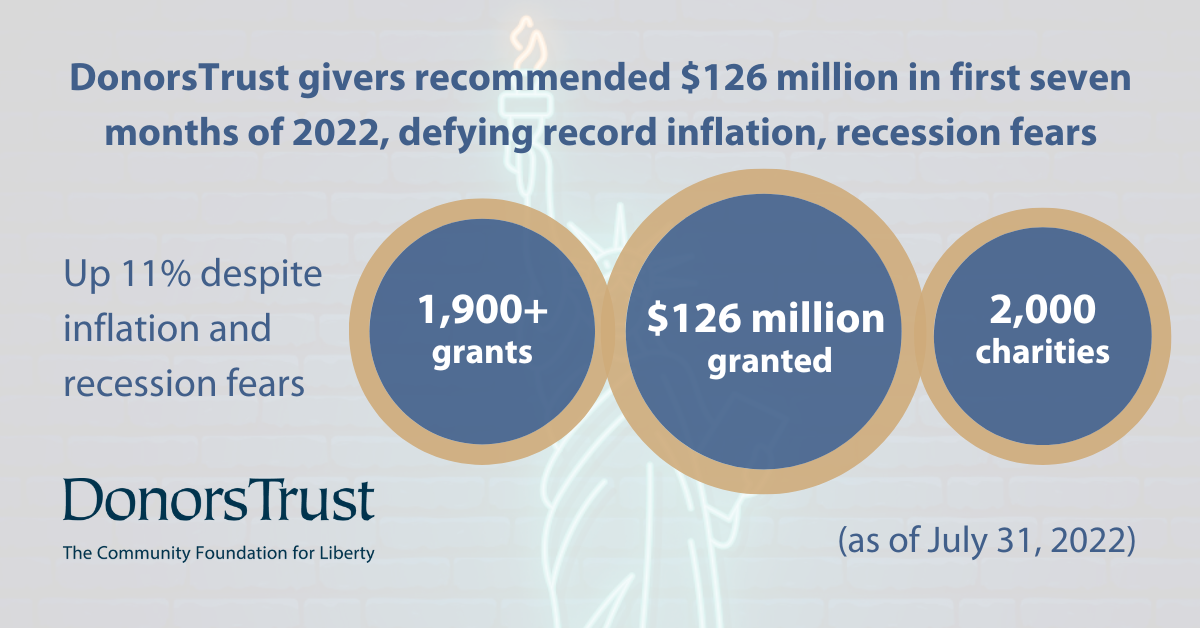 The DonorsTrust community of givers during the first seven months of 2022 recommended more than $126 million to nearly 2,000 unique nationwide charities, defying historical rates of inflation and ongoing market volatility.

While this 11% increase in YTD charitable dollars is significant, the total number of grant requests is up a whopping 49% compared to the same time period last year, suggesting the DonorsTrust client community is spreading more dollars among more institutions.

As DonorsTrust President and CEO Lawson Bader says, “The sheer volume of grant requests so far from our community of givers is a reflection of the historic number of new accounts opened with DonorsTrust during 2021 and 2022.

“What’s more, the pace at which our donors are meeting charitable needs is evidence of an engaged, serious community of givers that understands nonprofits need more financial assistance to make ends meet during these turbulent economic times.”

In 2021, DonorsTrust paid out nearly $190 million to charities nationwide and—if giving continues to keep pace with the first half of 2022—it will end the year easily exceeding last year’s record-breaking total.

DonorsTrust givers are stepping up to meet needs even though the S&P 500 has declined 20% YTD, the index’s worst six months in more than 50 years, according to CNBC. Other major stock indexes like the Dow and the Nasdaq were down 15% and 30%, respectively, in the first half of 2022.

During the first half of 2022—in partnership with the Atlas Network, a global network of think tanks that work to secure economic and personal freedom for all individuals—DonorsTrust’s donors responded to the Ukrainian crisis by raising more than $2.5 million and counting for life-saving supplies.

“[Ukrainians] are committed, not merely to repelling [Russian] aggression, but to doing it because they want a free society. They want to live with freedom of speech and free markets and the ability to live your own life as you want and not as someone commands you to live,” says Palmer.

In addition to funding relief efforts in Ukraine, clients’ giving in the first seven months of the year focused heavily on grant-making to policy organizations that preserve and protect civil liberties. More than $85 million in the first seven months of 2022 went to policy-focused charities, including State Policy Network, the Foundation for Government Accountability and the Constitutional Defense Fund.