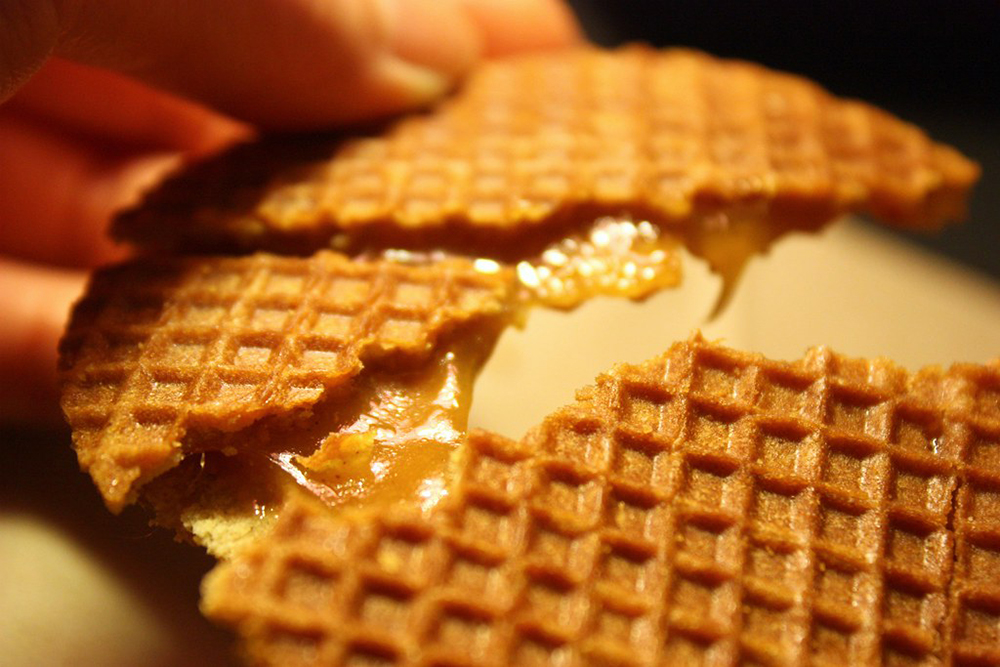 For me this past year has been all about the stroopwafel.

I hope you are acquainted with that delectable wafer – the round cookie with not one, but two layers of caramel filling. This year I found a small container of them in my stocking – a genuine Christmas miracle.

I’m a United Airlines regular. I still remember my original eleven-digit Mileage Plus number from 1982. While airline travel is not what it once was (and that was before 2020), United increased my loyalty when they began serving the Dutch-influenced treat while onboard.

There was a near riot among us high level frequent fliers when United retired the cookie in 2019, but they caved to the gastronomical pressure and re-introduced it. In my (albeit reduced) air travel last year, it kept my sanity and symbolized some degree of normalcy and independence. It also was a source of laughter. I giggled each time the flight attendant walked the aisle repeating the syllabic mouthful of “pretzels or stroopwafel?”

Throughout 2020 I observed two kinds of people: those who took actions based largely on fear, and those more circumspect. In other words, some enjoyed stroopwafels and others, did not.

Another way to think about it is that in 2020 we all knew folks who happily walked out their front doors and those who could not. Generalizations are never fair and certainly not always accurate, and I believe the distinction is more about nature than it is nurture. Members from both camps are good people, equally logical in their decision-making, desirous of facts, and alternate between pessimism and optimism.

The problem is these distinctions are now a new ingredient in our already polarized societal melting pot.

The danger is that dragons feed on fear, and they are afoot. Vacuums are forming as power shifts among traditional political alliances and camps. Political ego has not only shattered decency but made cynicism the norm. Certain segments of society are adapting, even benefiting from what is changing around us, while others are left to suffer its consequences.

Liberty, it seems, has lost a step. Common sense and groupthink are increasingly at odds. There are people who seek change according to a set of values to be attained, without regard to the undergirding principles that may be sacrificed along the way.

How we view this New Year is not a binary choice between the glass half full or half empty. Life does keep improving, we just never really think about it. As Johann Norberg reminds us in Open: The Story of Human Progress, while 2020 presented a unique set of challenges, the world continues its upward trend towards being safer, healthier, richer, peaceful, and freer. Entrepreneurship and adaptation forced improvements and opportunities that will benefit many of us.

2020 gave the world Covid-19, but also the ability to work from home, use the internet to survive and discover and produce a vaccine within twelve months. Businesses had more tools with which to adapt to unfamiliar circumstances. None of that was possible a mere twenty years ago. These, however, are mere footnotes, especially after this week’s debacle on Capitol Hill. Our problem is more serious than self-identifying as an optimist or a cynic as we ring in the New Year. As the dragons circle we are forgetting that we are intrinsically a free people. Our being, our sense of self, is inalienable and inherent. We are allowing our identity to be shaped entirely by our circumstances.

Externalities are exactly what they sound like: forces outside us and divorced from our control. Obviously, in these pandemic days we are all under the influence of many an externality – actions and decisions that have changed our lives, our commutes, our sense of community, our extended families, our routines, and our mental exercises built previously on what could be possible rather than merely on what now is.

The question for 2021 is what will you do about it?

High Stakes For the Helping Hand

In 1963, while jailed in Birmingham, Alabama, Martin Luther King Jr. powerfully wrote “We must come to see that human progress never rolls in on wheels of inevitability. It comes through the tireless efforts and persistent work of men willing to be coworkers with God, and without this hard work time itself becomes an ally of the forces of social stagnation.” Dr. King of course was specifically addressing the great injustices of the Jim Crow era, but his call to action is timeless.

In the annals of philanthropic history, 2020 will be a case study in the power of giving in times of crisis. Granting of time and resources is a critical step in fighting the forces of social stagnation. If small businesses, retailers, restaurants, art galleries, museums, foodbanks, and educational services are to survive, it will be due to the voluntary work and financial sacrifices of millions of Americans, not to politically self-interested and economically hollow bailout bills. Buried among the headlines focused on elections, protests, hospitalizations, and deaths are thousands of stories of average households bringing practical and emotional relief starting with their respective neighborhoods. But there are dragons afoot in the philanthropy world as well – powerful foundations that believe these armies of donors should be led. Using money that originally did not belong to them, these foundations now propose “reforms” that mask their desire to guide citizen’s giving patterns and thus discourage, even forcefully stop, support for groups or causes or belief-systems that run counter to their own.

Standing on the sidelines championing such efforts are political actors who are motivated by envy and arrogance, and most recently by rage and revenge. They act with righteous indignation from a position of fear rather than from a genuine and humble belief in the inherent value of individuals, as free men and women, to make their own decisions, and how such diverse decision-making gives society its power and strength.

My biggest frustration of 2020 is that political actors at the national, state, and local level are not paying a price for any of their judgements. True, one can “vote them out of a job,” but, to me, losing an election would be a freeing experience and not a punitive measure. There is no true accountability for making the “wrong” decision, and politicians rarely apologize.

Consequently, private actors, small businesses, restaurants, churches, schools, and so many others have borne the cost of poor public policy. And now dragons are flying around our country breathing fire into the idea that government should be doing even more and brazenly suggesting that 2020’s increase in charitable support comes at the expense of government actors and agencies.

In 2021 remember who you are. Your giving must be thoughtful, targeted, and strategic. It needs to include leaving your front door even when you are fearful to do so, and, in some cases perhaps even when told you cannot. Personal responsibility is an important, but sometimes overlooked leg of the triumvirate stool of classical liberal thinking.

Commerce combined with charity are forces that will thwart poor political actions and solve problems. Continue to support the local theater, your places of worship, the food and medical banks, the job retraining programs, and certainly medical research and health care. But be specific too when it comes to support for policy-oriented charities. There are groups that will be in positions of influence, including battling attempts to standardize private giving, and frankly there will be those with name recognition but are impotent to address today’s challenges. This is the year to begin the Biblical separation of the wheat from the chaff. We cannot afford anything less.

In 1938 Professor Tolkien said dragons are the final test of heroes. “For the dragon bears witness to the power and danger and malice that men find in the world,” he said. “And he bears witness also to the wit and the courage and finally to the luck (or grace) that men have shown in their adventures — not all men, and only a few men greatly.”

2021 is the time we start unshackling ourselves not so much from what has been forced upon us, but from the fetters that are self-inflicted. Let’s not be an ass but take a bite of the sweet opportunity before us, gargled and dragon-infused as it might be, and celebrate and act on a call to freedom.

Just be sure to pack some extra stroopwafels along for the journey. You’re gonna need them.