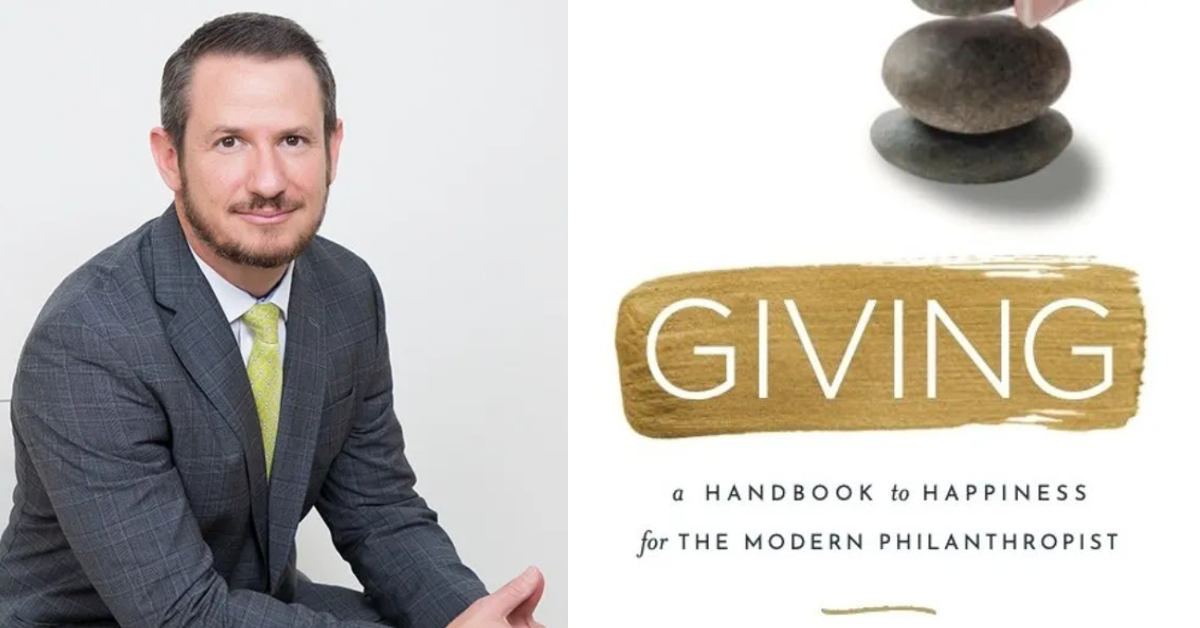 On this episode of Giving Ventures, Peter talks with financial advisor Gideon Bernstein about his book, titled “Giving: A Handbook to Happiness for the Modern Philanthropist,” the upside of philanthropy and how the tragedy of his son’s murder changed the way Bernstein views his charitable giving. If you need a fresh perspective or a roadmap for your philanthropy, you won’t want to miss this episode.

The Secret to Happiness and the “Afterglow” of Giving

Bernstein says he begins all of his presentations with “a big secret” he desperately wants to share with his audience—a secret that’s accessible and out in the open for all to see and take advantage of. The secret, he says, is that charitable giving is the key to happiness.

“It’s right here for everybody and that secret is giving and, believe it or not, if you haven’t tried it before, you just do something small or something big to help somebody else out and you’ll see what that after-affect is—it’ll put a smile on your face.”

Don’t take his word for it, however. Social scientists will back up his claim.

“There’s research that has been done that shows that giving actually does have an endorphin effect. There is an after-glow that stimulates part of the brain that is the pleasure center that is coming from having some social connection and making an impact on other people’s lives.”

That philanthropic afterglow proved especially important to Gideon and his wife after the devastating loss of their son Blaze in 2018. No strangers to philanthropy, the couple found strength from members of their community who encouraged them to honor their son’s generous heart through greater giving.

“We had a tremendous group of friends in our community that were helping to guide us along and whisper in our ear on ways that we could have an impact and do something that would—in the words that I think Sheryl Sandberg used in her book ‘Option B’—[provide] a way for us to find a ‘co-destiny’ of being able to carry on Blaze’s spirit with us after his death,” says Bernstein.

The result? A movement called “Blaze It Forward,” a campaign that encourages others to find ways big and small to give back to their community in Blaze’s honor. The key difference, however, is that—instead of random acts of kindness, the campaign encourages intentional acts of kindness.

This is a key part of the campaign, as Blaze himself was intentional. In a moving tribute for the Los Angeles Times, Blaze’s college advisor, Jamie-Lee Josselyn, says the young man was known for his carefully crafted meals for friends and family, and that he was kind but discerning in his work for his college literary magazine.

This is how Blaze ought to be remembered, she says.

“[N]one of us should be remembered only for the worst thing that happened to us,” she writes.  “While the pain of this loss will always remain, for me Blaze’s memory now mingles with the joy of a good meal, the enlightenment of a brilliant poem, and the hilarity of singing along to a ’70s Europop classic.”

Part of the #BlazeItForward campaign included a number of memorial funds that provide paid internships for needy or talented students interested in the same programs Blaze was a part of during his short-lived time at the University of Pennsylvania.

Blaze was a gifted writer and part of the Kelly Writers House, a group dedicated to organizing and promoting events for creative writers, and on deck to manage Penn Appétit, a student-run foodie magazine at the University of Pennsylvania.

As time marches on, says Gideon, part of his focus, in addition to continuing to oversee his son’s memorial funds, is discovering ways to motivate others to enhance their charitable giving, including speaking to and educating audience on ways they may be able to memorialize lost loved ones.

In addition to the nuts and bolts of charitable giving and creating funds to either #BlazeItForward or honor lost loved ones, Bernstein says there is also a spiritual component to giving, and anonymous giving in particular.

“There are many religions that say that anonymous giving is the highest level of giving because it’s the most altruistic, like you’re not doing it for recognition. You’re not doing it for anything aside from just trying to make greater good for the world, regardless of which organization that you’re giving [to.]”

What’s more, Maimonodes, one of the earliest Jewish philosophers, says Bernstein, is known for saying there are differing levels of giving but that anonymous giving is the highest of them all because it brings a giver closest to God.

That’s one element or one way of looking at charitable giving, says Bernstein, but there are other more practical reasons to give anonymously using a charitable-giving account, including to shield oneself from unwanted financial solicitations.

Philanthropy as Your ‘Fourth Kid’

Another benefit of a charitable-giving account, in addition to the anonymity, says Bernstein, is the ability to grow your giving using a donor-advised fund and to look at giving as extension of the plans you have to leave money to children or grandchildren. In other words, your favorite charities are your babies, too. Not unlike

“A lot of people are worried about giving from the perspective of ‘Oh my god, if I give all my money away or, if I give some of it away, there’s not going to be any left for my kids,” says Bernstein, adding one couple in particular was worried about this scenario but was able to create an “Aha!” moment.

“For them, that made a lot of sense when I introduced it from the perspective of ‘You don’t have to give it all away but what if you imagine that all of your favorite charitable organizations are going to become one of your children upon your death or even now…

In fact, as Stephanie Lips, one of our philanthropic advisors, often points out, mapping out a legacy plan with DonorsTrust can actually help save you money in the long run. It can save your loved ones precious resources that would otherwise go to Uncle Sam and, ultimately, give you leeway enough to leave money to family and your favorite charities. (Read more about that scenario here.)

Really, the sky is the limit for philanthropy, especially when leveraging the flexibility that charitable-giving accounts provide everyday givers like Bernstein and his wife and their community of friends in Orange County, California.

“You don’t have to be Bill Gates or Warren Buffet to be a philanthropist anymore. You can have your own private donor-advised fund … and you get a lot of benefits from creating the donor-advised fund for very little cost, and you can donate appreciated stock to it every and you get the tax write-off and it makes it super easy for you to be able to do your charitable giving in the future.”